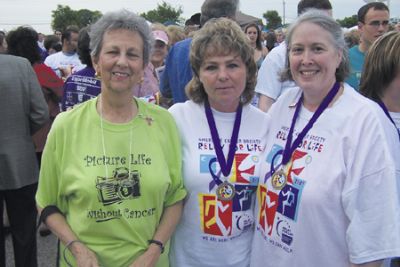 By BOBBY HORN JR.
BAYTOWN– There were Pirates, Bees and Angels coming together this past weekend for a common cause: to beat cancer.
On Friday and Saturday the area hosted their 10th Annual Relay for Life fundraiser. While serving primarily as a fundraiser, the Relay turned into an all-night party complete with food, music and games, as members of the more than 140 teams were on the walking track from 7:15 p.m. until 8 a.m. the following morning.
First and foremost the event is a fundraiser for the American Cancer Society. The Bay Area Relay for Life has been number one in Texas for the past six years in a row in monies raised. The title is likely to stay in Baytown. As the event came to a close, co-chairman Leila Bates took the microphone and announced that they had raised $789,459.50, shattering their $500,000 goal by over a quarter of a million dollars.
The event opened Friday night with a color guard from the Ross S. Sterling MCJROTC unit presenting the colors.

Following a proclamation from Baytown Mayor pro tem Sammy Mahan, co-chairman Julie DeTorre gave a presentation honoring two ladies who were instrumental in getting the Relay off the ground 10 years ago: Nancy Riis and Martha Jane Huddle. The pair were honored as a group of butterflies were released in their memory.
This was followed by the opening lap, which is traditionally taken by cancer survivors. Whether a survivor for less than a year or over 50, each of their names were read and the number of years survived announced as they received a medal and took to the track.
Honoring those who lost their battle with cancer, a Memory Wall was placed at the gate, with the names of those who passes away.
Around the track was seen hundreds of paper sacks of different colors, each with a candle inside. Each bag was named in honor of someone who battled cancer or in memory of those who lost their battle.
At 9 p.m., the lights were darkened and the candles lit creating a circle of light as participants held a moment of silence.