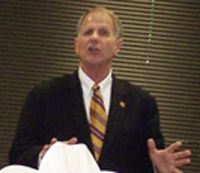 By LEWIS SPEARMAN
CROSBY  When Congressman Ted Poe spoke at the Crosby Community Center on April 28 most left the room asking,  Whos side are the rest of those guys on that run or govern the Federal Government?
The manifold problems involved with fighting terrorism with a porous border, prosecution of law enforcement doing their jobs, illegal immigration, down to how U.S. 90 stopped at Beltway 8 made many in attendance question just exactly what motivation could prompt officials to decide, for instance, it would be fine to have Mexican trucks be allowed to go throughout our country but American trucks have to stop 20 miles inside Mexico.
Either we are going to have to stand up or we are going to be run over, and Im tired of being run over. Wilma Hill stated after the meeting, I am real angry that the Supreme Court will not allow us to have an official language.
Poe (R.) started by outlining the boundaries of the Second Congressional District of Texas. He reported on the best way to correspond with him as he serves this district in the United States House of Representatives. The most rapid way to write your congressman now is to e-mail: poe.house.gov or telephone (281) 446-0242.

Poe serves on the Transportation and the Terrorism Committees and on three Sub-Committees: Highways, Aviation, and Coast Guard.
Edifying many that the bill past last week in the house for peanut farming subsidy also included a proposed date for withdrawal from Iraq.
No military person with any sense would ever state the date on which they are leaving a war. Those folks that hate us in Iraq will wait us out if we let them know when we are going to leave. The war is not going like anybody wanted it to go. We have three choices: one is to leave right now, the second is to keep things exactly like they are, I call that the Vietnam Syndrome, it isnt really aggressive enough to get the job done, the third option is to send more troops over there with more resources and facilities so they can hopefully get that country under control and turn the country back over to the Iraqis because it is their responsibility to control the country. Most of Iraq is under control but around Bagdad you have two Militias fighting for turf. The Shia and Sunni Militia fighting for turf. This is just a fancy term for nothing more than a gang like in New York and California. The gangs in New York City do nothing more than control turf. That is all they do, they dont stand for anything they dont believe in any political structure except killing people that they dont agree with.
The new policy is that the Militias must disarm or they will be taken care of.
The troops in and around Bagdad dont believe they have enough troops to do that so they have asked for more troops.
My own feeling is that congress cannot run a war.
More letters and e-mails to my office by far are concerned with controlling our borders.
The immigration bill that is floating in the Senate deals with immigration, lawful immigration, border security and amnesty. Amnesty means you get to stay in the country. The Senate bill says if you pay your fines, pay your taxes you get to stay in the country. You know thats like if you find a burglar in your home and he pays a little rent and he gets to live there. Weve tried that before: in 1987 congress passed a very similar bill that required more border security to deal with immigration problem and it was a mess, the border patrol was overwhelmed and therefore it was a mess. But the amnesty bill remained and therefore we have this problem of the expectation of another amnesty bill. Border security was never done but amnesty was.
We aught not to have this big old comprehensive bill. We call it a comprehensive bill because if it has the good, the bad and the ugly in it the more likely it is to get passed.
I think we need to have three separate bills. The first bill is one that deals with the problem. The problem is people are coming over here without permission. The border security is the first problem. The next terrorist that comes to the United States is not going to get in a plane and land at Intercontinental Airport, they are going to cross the river and come in from Mexico like everyone else does. So, seal the border first. 
Next the problem is legal immigration, we get calls all the time and it takes years to come here legally. We bring in two million people a year legally. That is more than all the European countries put together. The immigration service will tell you they cannot keep up with that many people. After 5 years of 60% of people being on visas they do not go home. Our Federal Government has no resources to find out who that 60% of people are. My personal policy is an old law established under Eisenhower, Any employers that knowingly hires illegals they were going to be prosecuted for it. And what happened, they started going home.
It was plain in all that attendants learned that Ted Poe knows it is where you put the initiative that things get done. Often times Federal Regulations have put the initiative on things that diminish the well-being of its citizens.