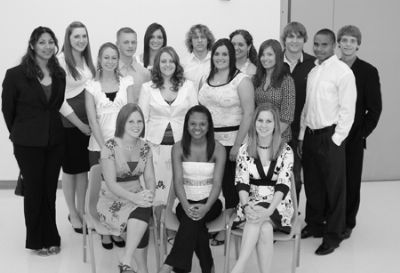 HIGHLANDS Each year the Highlands Rotary Club awards college scholarships ranging from $1000 up to worthy students in the local high schools.
This year, under the direction of Rotarian Dr. Larry Smith, a committee of ten Rotarians screened 36 applications, and made the difficult decision as to recipients.
These scholarships are one of the major benefits of money the club raises from its annual Chili Feast. Due to a strong community response, the club gave a record number of 16 scholarships, totaling $20,000 to the candidates.
The scholarships were presented last Monday night, at a dinner held at the San Jacinto Community Center in Highlands. The keynote speaker was the retiring superintendent of Crosby schools, who recounted in his talk about his days growing up in Highlands, and later Deer Park.
He thoroughly entertained the crowd, with his tales of local anticks in his childhood. But the message of his talk revolved around a paper he wrote years ago, entitled A person who made a difference. It recalls the little league coach Hendrix had, Hap Marshal, who chose his team with fairness over politics, and the impression this made on the young Hendrix. His message to the scholars, Each of you is a potential Hap Marshal, and you can make a difference in someones life.