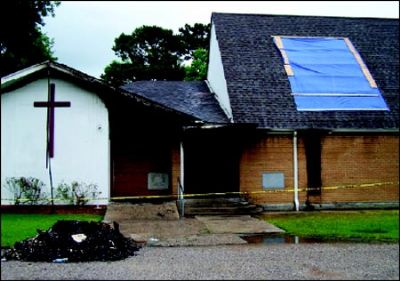 By LEWIS SPEARMAN
BARRETT STATION  During the Juneteenth remembrance, at about 10:30 p.m. on Thursday, June 14, Crosby Volunteer Fire Dept. and Highlands V.F.D. risked life and limb to contain a blaze in the edifice of First Baptist Missionary Church.
That blaze had been set, authorities have determined.
The just under 300 member congregation of the Church continued on unabated worship on Sunday. Pastor Tommy W. Johnson commented from Drew Intermediate School just prior to 11:00 service, The final decision was that it was definitely arson. The sanctuary was deliberately set on fire.
According to Rodney Janczak of the Harris County Fire Marshals Office the blaze had been deliberately set with damage estimated between $200,000 to $250,000. When firefighters arrived, smoke boiled from the front and back entrance.
The structure is still semi-tight, but there is a lot of heat damage.Janczak stated.

Pastor Johnson explained that he had suspected that the arson might be the result of a hate crime but was told that usually when something like that happens there is graffiti left to let victims know who did it or there is some kind of symbol left to let them know what the intent was but Johnson added, Nothing like that occurred, so, it is a mysterious happening. But if God had wanted to he could have prevented it. So, if he allowed it – we are in line for blessing because he allowed this for a reason. We may not understand the reason new but here are blessings for us down the road. People have been good to us. We have access to Drew Intermediate School for worship. The school district has been very cordial to us. The Superintendent Dr. Hendrix, who is about to leave the post, and Mike Joseph, who is acting superintendent has opened the door and allowed the congregation to get comfortable. So we just look forward to a wonderful time even in the midst of the situation. It is interesting that when the church first was founded services were held at this school.
The churchs founding members, this edifice built in 1960, were descendents of the first freed slaves to settle in Barrett Station. A contribution account was opened at Crosby State Bank for those that want to donate to help rebuild the edifice. Pastor Johnson indicates it will take about eight months for the repairs to be made and that much of the damage will be covered by the churchs insurance.
As to whether the pastor knew of any recent motivations for the setting of a fire, Pastor Johnson replied, Anytime you are preaching the word, really preaching the Gospel, it is controversial. Christ was controversial. Because anytime you are trying to get people on the right track you have to show them what is wrong to get them to move onto the right track. We do that every Sunday, I have been doing that for the last 16 years here. So, there is nothing different, that I can see, that would cause someone to come and try to burn the sanctuary down. I would think that if I had offended someone to that point they might confront me rather than assault Gods house when that would effect the whole congregation.
Janczak indicates that there will be a federal adjunct to the investigation by the Bureau of Alcohol, Tobacco, Fire and Explosives.