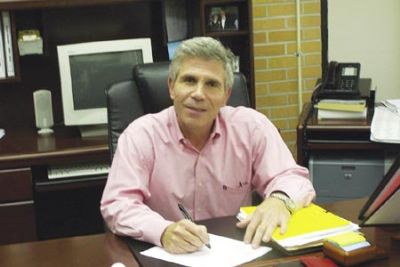 By BOBBY HORN JR.
CROSBYThe Crosby ISD Board of Trustees didnt have to look far to find a successor to retiring Superintendent Dr. Don Hendrix. He was, quite literally, across the hall.
Mike Joseph, who was serving as assistant superintendent for curriculum and instruction, was no stranger to the board having served Crosby for the past 23 years.
Joseph started out his career in Crosby teaching 8th grade math. Eleven years later he was promoted to principal at Newport Elementary. He held this post for 10 years until, in 2005, he moved up to assistant superintendent.
Joseph said that coming up through the ranks given him a unique perspective to the post, as each promotion has widen his focus from a classroom, to campus to the entire district.
In these 23 years, Joseph said that he was learned some valuable insight into Crosby students.

We feel that Crosby can compete with any school across the state, he said. And when they get to college they can compete with kids anywhere.
The view of students comes not only from a teacher and administrator but also a parent. Two of Josephs sons have graduated from Crosby, one going on to Texas A&M University and the other to the Washington University in St. Louis. His third son will be a senior in the fall. Josephs wife, Roseanne, is coordinator for the dyslexia and speech pathology department with the district, having served the district for 28 years.
Joseph said his goal is that every student who graduates from Crosby and wants to go to college will be prepared. Those who choose to go directly into the workplace, vocational training or military, he said, will also have the skills they need to be successful.
While proud of the achievements that students are making in college entrance exams and advanced placement classes, Joseph said that there is still work to be done. Areas most in need he said are math and science. Across the state, he said, students are having trouble on standardized tests in these areas, and Crosby is no exception. While he approves of testing in general, Joseph said that requiring passage to graduate is wrong.
Another issue facing the district is growth. While school growth is about140 students a year, Joseph said that Crosby could see significant growth over the next five to seven years, possibly enough to make Crosby a 5A district. Under the current guidelines, Crosby is about 550 students below the 5A mark.
To address this, Joseph said that in the fall he was putting together an exploratory committee that will review facilities needs. In May 2008 the committee, made up of community members and school employees will bring recommendations back for review.