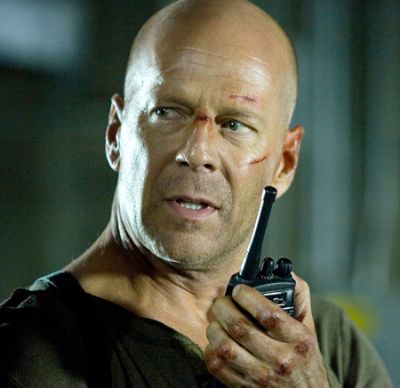 Its safe to say that this is the last time Bruce Willis will be playing Detective John McClane, and you can tell that Willis wanted his iconic character to go out with a bang. And another bang. And …
Thats what makes Live Free or Die Hard the best action movie of the year. It is wall-to-wall stunts, gunfights and Stuff Blowin Up Real Good.
And the icing on the cake is that you can tell Willis is having the time of his life and not just phoning it in for a huge payday. Bruces enthusiasm for the character is infectious. And for all the online bluster about how a PG-13 rating was going to spoil the film, I can tell you honestly that it doesnt. Live Free or Die Hard is a solid action movie  and yes, McClane DOES deliver his signature Yippy Kai Yay line.
The plot  as if it matters  surrounds an attack on the nations computer infrastructure, from power grids to national security systems, financial institutions, even traffic lights.
A really evil guy who is too pretty to be a nerd (Timothy Olyphant) is wreaking havoc on the country.
Det. John McClane has, in tow, a young hacker (Justin Long) who inadvertently helped develop part of the insidious code.
As the country crumbles down around them, McClane and the hacker have to try to stay one step ahead of the bad guys who can track them and then send helicopters, fighter jets and other nasty stuff their way.
One of the highlights of the film is a cameo by filmmaker Kevin Smith, who plays an uberhacker with the handle, Warlock. It was great to see Smith in the role, but it also made it glaringly obvious how weak Justin Longs characterization was. It wouldve been better to have Silent Bob himself hang with McClane and whomp some cyber-terrorist booty.
Yippy-Kai-Yay, indeed.
GRADE: A