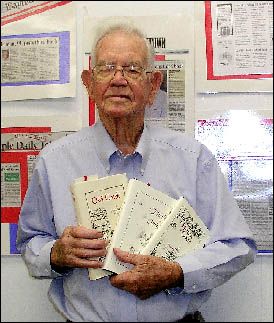 By Gilbert Hoffman, Star-Courier Publisher
HIGHLANDS James Brazzil was the featured speaker at the Chambers luncheon last week, and he proved to all in attendance that he is a superb storyteller.
Brazzil spoke about his boyhood years, growing up in Owl Creek, and how he became fascinated with the newspaper business, and after a long talk with his father, ventured off for his first newspaper job, which would turn into another 9 papers before he settled in Highlands in 1955.
Brazzil said his first paycheck was for $10, and his father was worried that he would not have a permanent job, but end up as a thistle in the wind.
But in 1955, he and Alton Neatherlin moved to Highlands from Nacogdoches, with the purpose of starting their own newspaper.
As the story develops, Brazzil is not only the publisher of the local paper, but involved in the development of this small town into the lively and busy mercantile center that it became.

Brazzil helped found the towns first bank, was active in its most important institution, the Rotary Club, helped get better schools by combining with Baytowns Goose Creek, and even helped town leaders get Highlands incorporated, at least for a short while.
Throughout his talk, it was obvious this quiet and thoughful man loved his newspaper work, and his town, and was proud of both as they matured.
James Wilson Brazzil grew up on a farm in Owl Creek, near Flat, Texas , as the third of ten children. At the age of 21, he left the farm to pursue his dream of being a newspaper man. He worked for various Texas newspapers over the years, and even served as a news writer and editor for the U.S. Air Force during World War II.
He eventually settled in Highlands, Texas with wife Bonnie, where they raised three children. In 1955, he helped found the town’s weekly paper, “The Highlands Star.” For nearly 19 years he worked a editor and co-owner of the paper. When he retired, he kept on writing  this time, books. His first, Owl Creek, was published in 1988; his second, The House of Coot, in 1994.
A Thistle in the Wind, published in 2006, is his third book.
Brazzil, now 91, still resides in Highlands and continues to be an active member of the community.