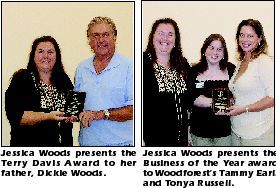 HIGHLANDS At their monthly luncheon, the Highlands Chamber presented service awards to local public safety officials, and community leaders in an annual tradition.
The top award is the Terry Davis Award, named for a person each year who gives outstanding service to the community, beyond what is necessary to make a difference in the Community.
Chamber president Jessica Woods said that she was honored to be able to award her father, C. R. Dickie Woods with the Terry Davis award. Dickie was cited for his leadership, support of community activities including the Chamber and Rotary, and outstanding business practices in the community, including many years as owner of several key businesses.
Another key award is to the Business of the Year. This went to Woodforest National Bank, for their participation in Chamber activities, and support of community events. The award was presented by Jessica Woods, and accepted for the bank by Tonya Russell and Tammy Earls.

Public safety awards included the following:
Outstanding Sheriffs Deputy, to Deputy Gordon Trott, Jr. who made over 1500 calls for service over the last 12 months. The award was made by his Captain, Mike Talton, who also paid tribute to Gordon Trott, Sr. for his service in the military, specifically at Iwo Jima during World War II.
Outstanding Constables Deputy, to Herman Eagleton, for his work in making a large number of drug arrests in his 7 years on the force, helping to eliminate a community problem. The presentation was made by Constable Ken Jones and Capt. Gary Jones.
Outstanding Firefighter of the Year, to William Tommy McMorrow, who also serves as a deputy constable as well as a volunteer firefighter. Fire Chief Harvey Little cited McMorrow for his work in keeping the communications equipment of the department up to date.
The Chamber also presented a check for $500 to Principal Karen Thomas of B. P. Hopper Primary School, who is the Partners In Education school for the Highlands Chamber. Kristi Stallings, PTO president and Chamber president Jessica Woods made the presentation to the Principal.