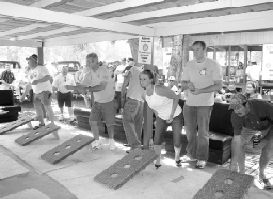 HIGHLANDS Rotarians were busy in this town as they hosted the annual Washer Tournament at Charlies Ice House, and then helped him celebrate his 15th year in business.
The 2nd annual Washer Tournament is a benefit, to raise money for the Community activities of the club, according to president Charlie Ward. Approximately $7000 was raised in the event, with several hundred people turning out to participate in the tournament, the silent auction, or just to cheer on their favorite players.
The event was held all day, last Saturday, Sept. 22, at Charlies Ice House on N. Main St.
Because the Highlands Rotary Club has such a strong reputation among the other 56 Rotary Clubs in the greater Houston area, for fun and successful fundraising, many city wide Rotarians turned out for this event.
Blaine Springer was judged the Grand Champion Washer Thrower. First Place Team was Blaines Bunch; Second, Unstabalized; and Third, Unit 4.
Speaker at Luncheon
Rotarians also listened this week at their luncheon to Dr. Jeff Ackerman, CEO of San Jacinto Methodist Hospital in Baytown, who spoke on the history of the hospital, and recent improvements in the facilities and services offered.
Since its inception in 1944, founded by Humble Oil, the hospital has served a large population in East Harris, Chambers and Liberty County that otherwise would not have access to good medical services. It affiliated with the Methodist system in 1983, and built its new bulding in 1988.
SJMC now has 270 beds in 2 hospital buildings, and serves 15,000 admissions and 100,000 outpatients a year. There are 300 physicians on staff or affiliated, Ackerman said.
He noted that the public perception of the facility has improved considerably, and that it now ranks in the top group of Houston hospitals in many ratings.
He noted that recent Initiatives have included a Cancer Center, Stroke Center, Cardiac Rehab, and soon a Chest Pain Center.