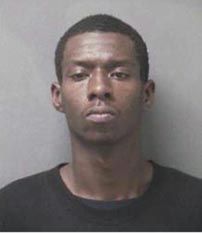 By LEWIS SPEARMAN
HIGHLANDS  Residents of the Hunters R.V. Park were distrubed by the sounds of gunshots in their community on Wednesday, October 3 before 3:15 in the morning.
Officially deputies report, Sheriff’s patrol units responded to a discharge of firearms call in the 600 block of S. Main, Highlands, Texas.  When units arrived, residents of an RV park directed units to a deceased white male in the driveway of the park.
The deceased was identified as Kevin Ferguson; when last seen he was walking from a nearby trailer home in an adjacent RV park with an unknown man.
Two suspects were described as having been with the victim at one point.
Harris County Homicide Detective conducted an investigation into the incident and charges are pending against Deandre Ledat Johnson. Detective Sgt. Dennis Field indicates Johnson met with Ferguson concerning a conflict related to illicit drugs. The conflict evidently escaladed and Ferguson was fatally shot. Ferguson died at the scene. His father was contacted concerning the death.