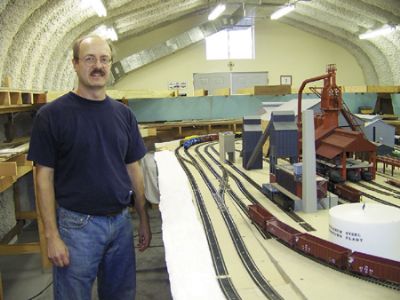 By Gilbert Hoffman
CROSBY As the holiday season approaches, many families bring out the model train to put under the tree. And every year during November, the model railroaders and clubs around the city of Houston hold open house for the public, to share the fun and information about scale model railroading for anyone that is interested.
About 80 model train layouts are on this years tour, and three of them happen to be in Crosby. The Open House for these will be next Saturday, Nov. 10 from 11 am to 5 pm, and the public is welcome to come by and watch.
These layouts are the work of the following modelers:
John Remy, at 15302 Atwood Lane off Runneburg, has a 25 x 40 foot metal building for his trains. The railroad is named the Windber Southern, after his home town in Pennsylvania. The scale is HO, which is 1/87 of the real size. John and his family have been in Crosby about two years working on this layout.
Jeff Clodfelter, 18618-B Miller Wilson Road, is a 30 x 30 foot double level layout, and has features such as a coal mine, war production plant, and wharf as part of the scenery. This is also an HO scale layout, which is the most popular size among modelers. His railroad is names the Santa Fe Knowcents Division.
Gordon Bliss, at 2735 Deep Anchor Way off Foley Road, has a large layout in his garage addition next to his house in Lake Shadows. Unlike the other two, it is modeled in N scale, about 1/160th the size of real life, and about half the size of HO. It emulates the real Santa Fe, from Chicago to Los Angeles in 1953, with a lot of steam engines. Completed scenery and buildings show Arizona desert landscapes, as well as forests, rivers, and cities along the way. Besides building his own layout, Bliss also belongs to an active club, the Houston N Crowd that meets at a popular model shop in Rice Village, Papa Bens. Bliss train room also features many real life photos he has taken of trains around the U.S., and a collection of 250 locomotives and many cars.