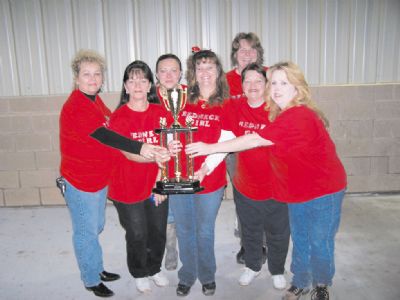 By BOBBY HORN JR.
CROSBY– Cold winds and rains did not stop a group of diehard cookers from going out to have a good time while raising money for a good cause.
On Friday and Saturday night the Crosby-Huffman Go Texan Committee of the Houston Livestock Show and Rodeo held their annual cookoff at the American Legion Hall.
This year 12 teams competed in the areas of fajitas, open dish, chicken, beans, ribs, brisket and showmanship.
Judging began Friday night with fajitas and continues all day Saturday, with briskets reaching the judges at 5 p.m.
The big winner of the night was the Bayou City Lagniappe Cookers. The team won first place in Beans, Open Dish, Ribs and Brisket and took a third in chicken.
The Cypress Boys won first in fajitas while Smoking Hat Cookers took top chicken.
The Redneck Girls won the showmanship award.
The cooking teams were not the only winners Saturday night. Proceeds from this and other fundraisers are returned to the community in the form of HLS&R scholarships for graduating seniors from Crosby and Hargrave High Schools.