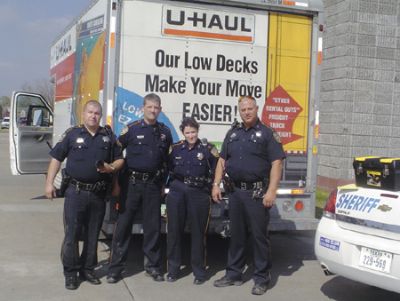 CROSBY- It has been set said that the best crime prevention is neighbors watching neighbors. This proved true recently when a resident of Barbers Hill Road called authorities when he noticed suspicious activity at his neighbor’s house.
On Feb. 25, the Harris County Sheriff’s Office received a call about a burglary in-progress in the 5100 block of Barbers Hill.
The observant witness stayed on the phone with the dispatcher, while giving a detailed account of what the three suspects were doing, Deputy K. Miller said.
The caller advised he first noticed them just before noon, when the suspects pulled up to a neighbor’s perimeter gate in a U-Haul truck. The two-man, one-woman crew broke into the residence and proceeded to quickly fill the truck with stolen property from the home. Dispatch was able to relay to responding units when the U-Haul truck was on the move, he added.
Miller said that following at a safe distance, the caller gave turn-by-turn updates.

Deputies first spotted the truck at the intersection of F.M. 2100 and Highway 90. With lights and sirens blaring on the patrol cars, the driver of the truck refused to stop and fled westbound on Highway 90 in excess of 80 mph.
One of the deputies pulled to the left of the U-Haul and made eye contact with the driver, before the suspect swerved several times in an attempt to run the Deputy off the road and into an approaching guardrail., Miller said,.
After turning onto Beltway 8 and exiting at Uvalde, the U-Haul suddenly stopped in the 7500 block of Uvalde. All three suspects bailed out and ran into a wooded area.
After a brief foot chase, two of the suspects were apprehended.
Russell White, 29, of Baytown, was identified as the driver. White was charged with burglary of a habitation, aggravated assault against a public servant and evading arrest with a motor vehicle.
The female was also caught and identified as 37-year-old Stacy Morris, also of Baytown. Morris was charged with burglary of a habitation and evading detention. A third suspect was able to elude deputies, for the moment.
During a thorough investigation, the third and final suspect was identified as 44-year-old Wade Hockett.
Although Hockett got away that day, he has since been arrested and charged with burglary of a habitation and evading detention. All three suspects are currently in the Harris County Jail, awaiting March 2008 court appearances.
ÒThe owner of the burglarized residence was contacted and informed of the incident and of the recovered property. The property, valued at over $3,700, was later released to the grateful owner, Miller said.