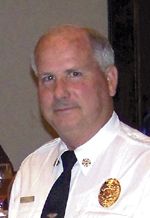 ¡By LEWIS SPEARMAN
PONDEROSA  Highlands Fire Chief Harvey Little was chosen Harris County Firefighter of the Year on February 20 at the Ponderosa Volunteer Fire Department over west of Houston.
It was a complete shock to me. remarked Little to the Star-Courier on March 4, I know there are more deserving candidates out there than me. I don’t even know who nominated me. They said they were going to give it to me at the meeting the month before but I missed the meeting.
Each year Harris County Fire Fighters Association selects and honors a fire fighter who has provided his / her department or the Fire Service in general with outstanding achievements, including:. outstanding job on a special project, leading out in a new endeavor, or making a dramatic rescue. According to the by-laws, the nominee should be considered because of past heroism in a fire related act, dedication to training, introduction of new or innovative training methods, or years of dedicated service to the Fire Service.
Harris County Fire Marshal Deputy Jerry Ickes, a former Highlands Fire Volunteer, presented the award to Little. A five man panel determined Little’s merit.