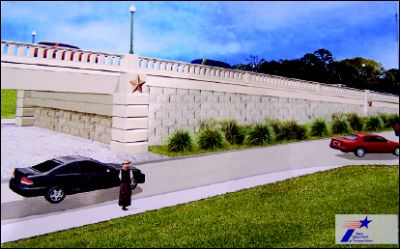 By LEWIS SPEARMAN
CROSBY — James Koch, Texas Department of Transportation (TXDoT) Director of District Design, detailed plans for an overpass at the railroad tracks on FM 2100 to the Crosby/Huffman Chamber of Commerce at Crosby Brethren Church on March 20.
Just as reported in the September 27, 2007 edition of the Star-Courier contracts will be let in January of 2009 with 45 to 60 days later for the contractor to mobilize and begin construction of four lanes of bridge with two access roads. The policy of TXDoT is to maintain the same number of lanes as exists (two North, two South) during construction. An exception would be while beams are being placed and most clogged traffic stops are being scheduled for weekends or late evenings.
The project is expected to take between 15 to 18 months during the construction phase. That places the time of completion in Summer or Fall of 2010,  likely that would be September 2010.
The expanse of the project is to allow three roadways to cross under as to allow turn arounds, Kernohan, Jackson Bayou, and Live Oak. Access will be available to Crosby Volunteer Fire Dept. from Reidland Ave. and for Harris County ESD#5, the ambulance service for Crosby. The Traffic Flow Division will have to decide if Crosby V.F.D. will have the light they request to allow fire trucks from Crosby Fire Station #1 during congestion onto FM 2100 during the construction phase.

The original and a current concern of the Chamber is the curve on FM 2100 near First Street, Koch indicates that current plans are to soften the curve by 10 feet of right of way.
Construction ends north at South Diamondhead and Wahl St. on the south end. The driver will have a choice at these points, to go down the access road or up onto the bridge.
The design phase is 60% completed, but right of way will drive the initiative not design. There are four parcels of land left to be acquired before the rights of way have been completely purchased. On March 13, the county and TXDoT signed an agreement to allow the right of way purchase to proceed.
The Bad News
Currently, there are no funds for consultant projects such as the widening of FM 2100 from Hare Rd. through Huffman. US 90 will conjoin with IH 610 and IH 10, the overpasses will be completed and there is no expansion of FM 2100 north. The projects will for now end where Harris County Commissioners Court has provided to purchase right of way parcels and extend the state time to reimburse the county, specifically for the overpass construction.
Generally, the County buys the rights of way parcels, then the state repays the county. Those four parcels of land that have yet to be bought are currently under new appraisal and new offers are being made.
Right of Way Parcels are cut back to $46m at a time when $80m is needed for projects already begun. The widening of FM 2100 to FM 1960 currently have a Developed Level of Authority, meaning TXDoT can do every aspect except begin construction. The projects will have to await the next Federal Legislative action to determine how much funds they have for projects. Koch expresses that TXDoT is as disturbed by the bottleneck as residents but budget cut backs will drive decision for most projects outside the overpass until the Fed reauthorizes highway funds.
Driving initiatives in Texas is the next 6 year Federal Highway bill. The current Highway Fund will be exhausted of funds in 2009. The Fed has taken $270m back from Texas for highways. Especially cut are Consultant Projects such as the ones to widen FM 2100 to Huffman.