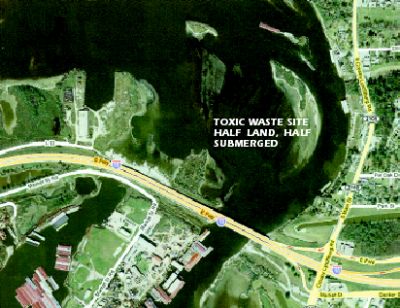 HIGHLANDSLast week, The Environmental Protection Agency (EPA) placed the San Jacinto River Waste Pits on the National Priorities List (NPL) of Superfund Sites.
The NPL listing provides access to federal funding for the countrys highest priority contaminated sites.
The waste pits, located near the I-10 bridge over the San Jacinto River, are contaminated with polychlorinated dibenzo-p-dioxins, commonly called dioxins, and polychlorinated dibenzofurans, commonly called furans. Wildlife in the area, including fish, has become contaminated with the pollutants, which can cause cancer and other health problems in humans. Despite posted warnings, some area residents continue to use contaminated parts of the river as a food source.
I appreciate the EPAs and the Texas Commission on Environmental Qualitys fast work on this, Rep. Gene Green (D-Texas). I hope the funding comes through soon so we can permanently get rid of this health risk to Harris County residents.

The pollution emanates from a paper mill waste site used in the 1960s and1970s and now abandoned. Scientists knew for many years that pollution levels in the San Jacinto River were high, but they didnt know why until recently when they discovered the pits.
In March 2007, Green and Rep. Ted Poe (R-Texas) asked the EPA to designate the waste pits a Superfund site, and in July the State of Texas added its name to the request.
According to the EPA, the NPL will guide the EPA in determining which sites warrant further investigation to assess the nature and extent of public health and environmental risks associated with a release of hazardous substances.
The Superfund designation provides access to federal money to help clean up pollutants if the responsible parties arent found or are insolvent. However, because appropriations for Superfund projects have dwindled in recent years, Green may have to make a special request in order to fund a cleanup of the site.
San Jacinto River Waste Pits entry on the EPAs web site: http://www.epa.gov/superfund/sites/npl/nar1773.htm.