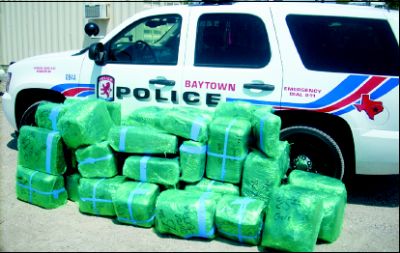 By BOBBY HORN JR.
BAYTOWNTwo Baytown Police Dept. officers got a big surprise Sunday, while on patrol along Interstate 10 East.
According to Detective Sgt. Shawn Fischer, Officers David Holland and Jeremy Tharp were working traffic enforcement on Interstate 10 near Sjolander Rd. around 9:30 a.m. on May 4th when they saw a white 2002 Chevy pickup with Louisiana license plates parked on the side of the roadway.
The Officers stopped to check and make sure everyone was okay inside the vehicle, Fischer said. There was no one inside or anywhere around the vehicle. The Officers then noticed a heavy very distinct odor, fresh marijuana. They looked in the bed of the truck and observed numerous bundles of marijuana, which completely filled the bed.
The officers also saw bundles in the extended cab portion of the truck.
Fischer said the truck was towed to the Baytown Police station. During an inventory of the vehicle forty six bundles of marijuana discovered.
Most of the bundles of marijuana weighed twenty five pounds, Fischer said. The total weight was close to twelve hundred pounds with a street value of over $300,000.
Fischer said that there was no apparent mechanical problem with the vehicle and investigators could only speculate that the driver was forced off the road or lost his nerve and abandoned the shipment. Interstate 10 is known to law enforcement as a popular drug corridor.
The incident is currently under Investigation by the Baytown Police Special Operations and Narcotics Division.