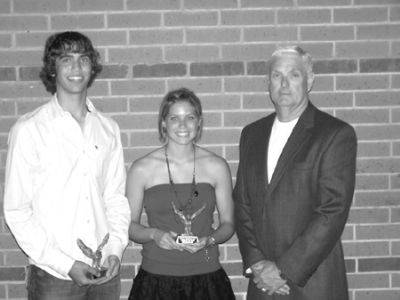 By BOBBY HORN JR.
MONT BELVIEUFor the first time in Barbers Hill history the Eagle of the Year Award, the highest honor a current student-athlete can achieve, was given to two recipients.
This years Eagle of the Year is Brooks Ybarra and Chandler Hall.
Athletic Director Don Price said that in selecting the recipients, each coach nominates one player for the award. Once the nominees are made the coaches, as a group, vote for the person who best exemplifies the Barbers Hill Scholar-Athlete. This year, he noted, three votes were taken and each time the vote ended in a tie. After the third vote, he said, they agreed to make the joint award.