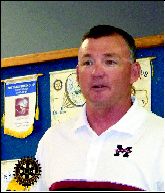 By GILBERT HOFFMAN
HIGHLANDSÐ Interest and excitement are building as the opening of the new Memorial High School approaches. Sporting a shirt with the new school logo, an M with Memorial written across it, the new athletic director and head football coach, Bret Boyd, gave a talk recently to the Highlands Rotary Club regarding his approach to the athletic program at the school.
Boyd started by reviewing his history, as the son of a football coach at TAMU and UT. He also coached at Mississippi State with Jackie Sherril. Boyd can say that he has been involved around coaching for 39 years. Even his wife is a coach, he noted.
In his own career, Boyd has been coaching for 25 years, starting at a high school in McKinney for 8 years. His first head coaching job was at Brookshire Royal, where he was head coach for 2 years, followed by y years at Harlingen and 6 at Kileen Ellison.

Boyd is currently rounding out the hiring of his coaching staff at Memorial, and preparing for his first season. This will be with about 100 students that have come out for the team. They will be 9th and 10th graders. He is also working at Highlands Jr. with 8th graders to prepare them for future Memorial teams.
The varsity team will start practice on August 4th. The team will play at the 4A level, with the schedule as follows:
First game Aug. 16, Sharpstown, Aug. 21 Katy Mayde Creek. Subsuquent games with Pasadena, Pearland Dawson, Bellaire Episcopal (3A), NF Smiley/Forest Brook, Dayton, Crosby, Barbers Hill, Galena Park, CE King, Kingwood Park, and for now the final game is open.
Boyd said he places a premium on physical development of his players, and they spend time in the weight room. He also will let them play multi-sports.
He expects that in two years the team will be scheduled to play a non-district game with Lee and/or Sterling, and in 4 years will have grown into a 5A category. His scheme for play will emphasize the kicking game, use a 2 back offense, and an I-formation.