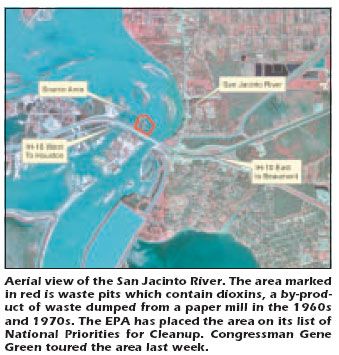 HIGHLANDS – Last week Congressman Gene Green, chairman of the Environment and Hazardous Materials Subcommittee of the House Energy and Commerce Committee, was in east Harris County to tour the waste pits on the west bank of the San Jacinto River near IH-10.

In March Green and U.S. Rep Ted Poe were successful in having the Environmental Protection Agency recognize the dangers of dioxin in the San Jacinto River and a waste pit near the I-10 bridge was placed on the National Priorities List for Superfund Site cleanup.

Today, I urged the EPA to move as quickly as possible with their cleanup procedure, he said.

Green said that when he returns to Washington he intends to holds hearings on the progress of cleanups of this and other Superfund sites.

The pollution came from a paper mill waste site used in the 1960s and 1970s and now abandoned. Scientists knew for many years that pollution levels in the San Jacinto River were high, but they didnt know why until recently when they discovered the pits.

Before remediation can begin on the site, the EPA must complete a feasibility study and design a plan to correct the measures.

The EPA says that they are working to determine whether, under current conditions, there are an potential or actual human exposures to contamination at this site.

The State of Texas, has already determined this to be true. Wildlife in the area, including fish, has become contaminated with the pollutants, which can cause cancer and other health problems in humans. Despite posted warnings, some area residents continue to use contaminated parts of the river as a food source.

The EPA should take any action to reduce the risk now while the long term cleanup is ongoing, Green said. Again, we deserve better than a sign telling us we should not eat the fish and crabs from our rivers.