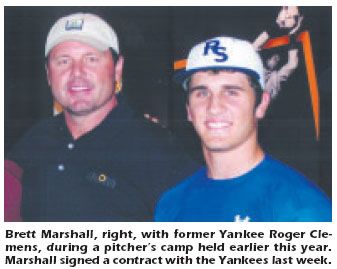 HIGHLANDS  Ever since Brett Marshall was seven years old he has dreamed of playing for the New York Yankees. Now, he might just get that chance.

Last week Marshall signed a contract with the Yankees worth over $1 million. A pitcher, Marshall was selected by the Yankees in the 6th Round of this years draft. He was the fourth pitcher taken by the Bronx Bombers and the 200th player overall.

Mother Elaine Marshall said they knew the Yankees were interested even before the draft. In March, scouts watched Marshall pitch against Atascocita. Marshall was impressive on the mound, with his fastball clocked between 94 and 95 mile per hours and his slide coming in between 84 and 88 miles per hours.

A scout wrote that Marshall was very competitive on the mound allowing just three hits and striking out seven in seven innings. Marshalls name in certainly on the rise, the scout wrote in the report.

He (Brett) has lived and breathed Yankees since he was seven years old, Elaine said. It was just amazing, like a dream come true.

Marshalls baseball career started with the Highlands Little League at age six. From there he went on to Sterling where, as a senior, he recorded a 10-2 record with 116 strikeouts over 89 innings.

His parents Elaine and Eddie Marshall are well known in the community. In addition to running Crawford Cleaners, they are both active in the Little League and Miss and Jr. Miss Highlands Pageants.

Marshalls contract includes an $850,000 signing bonus plus $200,000 for education expenses. Had he not signed with the Yankees, he planned to study business and economics at Rice University on a baseball scholarship. Having signed the contract he is now ineligible to play college ball.

On Aug. 7 Brett flew out to Tampa Bay to join the Yankees minor league team for the rest of the season which will end in September. After that, his mother said, he will probably be sent to Hawaii to play in an Instructional league.

In January he will return to Tampa Bay for a minicamp before Spring Training.