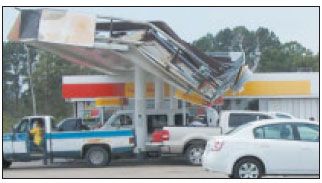 HIGHLANDS, CROSBY, HUFFMAN — These communities began to dig out from Ike before it struck with preparations; locally, it was a storm of falling trees and wind sheer; thus far local and private effort has provided the most relief.

Most emergency services believed that the county or state would supply them with fuel to keep services rolling in the event of such a disaster. Highlands and Crosby had to rely on alternative means. Most express some exasperation with federal, state and county relief efforts being less quick than expected.

The night of the hurricane, Precinct 3 Constables patrolled in high water vehicles from Baytown to Channelview from Highlands to Huffman under the direction of Sgt. Lee. Deputy Ricky Larkin took charge of the rescue boats. That law enforcement department worked traffic and crowd control throughout the areas during relief efforts.

The director of that Crosby ambulance service, Christy Graves, applied for and was granted a Texas Form I.C. 213 for disaster relief, that brought a F.E.M.A. Point Of Distribution (P.O.D.) to Crosby. During that time, Crosby Fire and ambulance services not only handled an increased volume of calls but also volunteered to man the P.O.D.

The school and the local emergency service district sheltered over 600 people, 60 dogs and 3 cats at the high school during the storm with an emergency medical triage inside. Mike Joseph, Superintendent of Crosby I.S.D., not only administrated the disbursement of the schools services including the Custodial Department but personally volunteered for emergency relief efforts throughout the district. The Crosby I.S.D. Board held two emergency meetings to determine that school would begin today, Sept. 25 and football would be played this same day. However the other team, the Hurricanes, was unable to play. The food stored by the district was spoiled by the storm. Much of the diesel used to run emergency calls was provided by Crosby I.S.D. once the fire and ambulances exhausted their supplies.

Residents cleared trees from atop houses and telephone lines after two days in the Nelson Subdivision. Crosby Volunteer Fire Dept. made over 100 trees down calls in Newport alone following the storm. Newport remained without power through Tuesday.

In Highlands, Harris County Precinct 2 Commissioner Garcia urged a Point of Distribution for San Jacinto Community Center with the Harris County Office of Emergency Management. But the County did not arrive until after 2 days. The Transportation Safety Agency had volunteers on hand to dispense ice, meals ready to eat (m.r.e.) and water before Federal Emergency Management (F.E.M.A.) trucks arrived. However, getting those three relief items at the same time was spotty at best with water being the only commodity available at times. Highlands trash removal began on Sept. 16 after much of the road blockage was removed.

The Highlands Volunteer Fire Department began preparations before Ike was named to keep emergency services flowing. Highlands emergency services, fire and ambulance ran over 100 calls over that weekend. Chief Little credits H.C. Office of Emergency Management with enabling his department to receive natural gas for the generator that kept his crews operating after the storm.

Ryan Hoskis, a resident of Highlands, donated two 55 gallon drums to the department to keep it running. BAMACo a private cleanup company from Florida supplied Highlands with donated gasoline and diesel. Equistar gave H.V.F.D. 20 gallons of diesel following a trip over to Channelview.

The dept. had to cut trees from their egress to get to calls. The fire dept. is postponing their barbecue until sometime in October.

Highlands V.F.D. never lost their radio repeaters, Harris County Dispatch did however get knocked out of broadcast ability for some time. Dispatch was then handled by cell phones.

Ike swatted Huffman with downed trees power lines, telephone interruption. The local high school had the roof torn off of the new press box, roof damage and broken windows at the high school and middle school. According to Dr. Douglas Killian, (as he was out cleaning up the playground at Ben Bowen Middle School with the Maintenance crew and the Operations Manager of Huffman I.S.D. on Sept. 19) roof tops of the dug outs at the baseball and soccer fields were blown away. The profusion of downed trees and power lines in Huffman made estimates of power restoration difficult but much of Huffman got power on schedule, Tuesday. One of the back up generators at Copeland Elementary developed a gas leak and went off but crews repaired that the second day and the school avoided food spoilage. A generator at the high school sustained water damage from flooding after window breakage. Maintenance repaired that generator also. No I.C. 213 was made for Huffman.