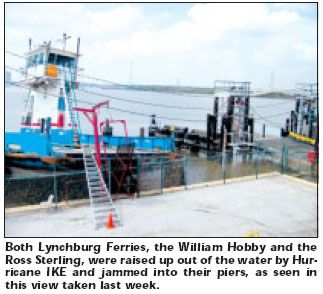 LYNCHBURG  Hurricane Ikes center came up the Galveston Bay, directly at Baytown and Lynchburg. It tossed around many boats, throwing them on land and on top of each other, and tearing up dock structures.

The two county Ferries at Lynchburg were picked up and thrown against their pilings, coming to rest partially in the air. For this reason, they have been out of service for over three weeks, and it looks like another two to three weeks before they can be put back in to service, according to Ferry Superintendent David Starett.

It will be necessary to put the boats into drydock, and check their hulls for damage, he said. Also damaged in the storm was the main office building at the Ferry, and the north landing.

Starett also said that the dock has no power at this time, so they cannot test the equipment.