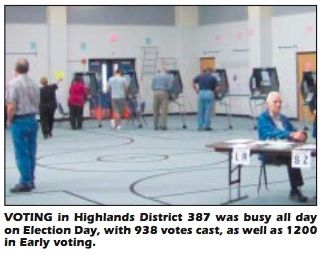 EAST HARRIS COUNTY  Voters in East Harris County expressed contentment for the jobs that local elected officials have been doing, returning two incumbents to their posts.

State Representative Joe Crabb beat another Joe- Joe Montemayor with 65% of the vote to win the District 127 seat.
Justo Perez came in a distant third with 2% votes.

Ken Jones, who has served as constable for Harris County Precinct 3, will keep his badge as voters overwhelming supported him in his reelection bid. He beat challenger Tony Lewis 67% to 32%.

Voters in the Crosby ISD service area returned two incumbents to the board In Position 4 Sheryl Shaw defeated Kathie S. Slotter 63%-36%. Dan Kasprzak, who holds the Position 6 seat, edged out Will Locke 50.4% to 49.5% or a difference of 49 votes. Gerald Blankenship ran unopposed for the seat that was held by Earl Boykin.

Ed Emmett, who took over as county judge when Robert Eckels resigned the post, beat Democrat David Mincberg with 53% of the votes.

Republican Pat Lykos will be the first woman to serve as Harris County District Attorney. She beat out Democrat C.O. Bradford 50.2 to 49.7%, less than 5,000 votes. Mike Stafford was a victim of the Democratic straight ticket voter, losing 51-48% to Vince Ryan.

Democrat Adrian Garcias attempt to unseat Sheriff Tommy Thomas was successful, as he got 56% of the vote. In the race for Harris County Tax Assessor/ Collector Paul Bettancourt defeated Democrat Diane Trautman 51% to 46%.

The race for Congressional District 2 was a landslide with Republican Ted Poe outpacing Libertarian Craig Wolfe 89% to 11%.

Texas Secretary of State Hope Andrade estimated that 68% of registered voters cast ballots, either during early voting or on Election Day. This is the second highest percentage in Texas history, with the highest coming at 73% in 2004.