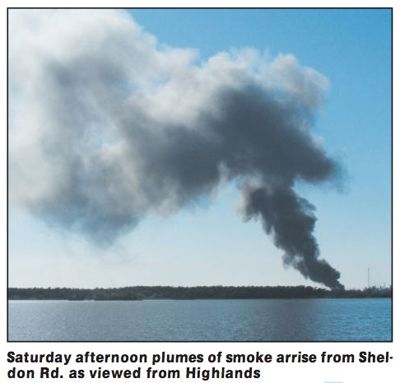 At about 2:20 p.m. Saturday, the Tex-Trude plastics warehouse on Sheldon Rd. erupted into flames, the blaze would be battled for 16 hours before Crosby Volunteer Fire Dept.s Tower Truck #82 sprayed directly into the flames, containing the fire.

According to the owner of the warehouse, the fire started inside the reaction” department where plastic products are converted for sale.

Channelviews fire department indicates that each of the three warehouses at that location is full of plastic pellets in cardboard and metal totes.

The main water source for firefighters is a 10-inch main on Sheldon Road. Fire trucks shuttled in water because the supply was greatly exceeded by the demand. On Sunday, Crosby VFD closed out the burning issue with their largest truck.

According to Cloverleaf Fire Department Chief Michael Battise, Harris County Pollution Control was testing the air. He said that even though the smoke was heavy, it is not considered toxic and no shelter-in-place or evacuation orders have been issued.

Plastic when burned generally gives off toxic smoke, according to the Environmental Protection Agencys Website.

Harris County Public Health & Environmental Services (HCPHES) were in fact on the scene monitoring air quality in that neighborhood, Monitoring to see if any particulate matter had any negative health impact.

Acrid smoke filling Highlands was from a resident maintaining a controlled burn at the same time as the fire across the river. The situation raised local alarm. HCPHES indicates that If someones burning impacts residents we have a complaint line they can call and we will investigate to see if air quality has been impacted.

Twenty Tex-Trude employees at work when the fire started have been found and all are uninjured by the fire.