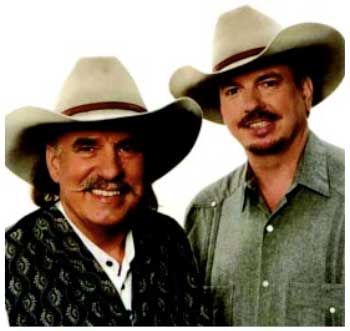 If I said you had a beautiful body (Would you hold it against me,) Spider & Snakes, Let Your Love Flow, For All the Wrong Reasons, Redneck Girl and Old Hippie continue to garner radio time since they were introduced in the 1970s and 1980s and became instant top of the chart favorites.

David Bellamy stated once, Our live draw is bigger than it was in the 80s. I think the same people that grew up with us and our music in the 60s and 70s obviously have raised a whole new generation of Bellamy fans who started toddling to our music.

The brothers now reside on a 150 acre ranch in Darby, Florida, North of Tampa. They raise purebred charlois cattle and Quarter horses.

Their first gig was in 1968 at the Rattlesnake Roundup in San Antonio, Florida. They developed playing for groups like Percy Sledge and Eddie Floyd as well as Little Anthony & the Imperials.

They were opening acts for Bob Dylan, James Taylor, Van Morrison, Poco and the Byrds during the L.A. heyday. When Let Your Love Shine broke out in 1976 it sold over 3 million units worldwide.

The bothers have branched into a corroborative with about thirty other artists including Alan Jackson, Dolly Parton, Willie Nelson, Tanya Tucker and Montgomery Gentry.

The Bellamy Brothers released a gospel album entitled Jesus Is Coming that features new songs written by them. The new combination looks into the Post-modern condition against the faith. One song, Grandmas God seems to be the personal story of a spiritual quest from the smoky haze of the 60s and 70s coming back around to the Old Time Religion.

Obviously, humor is a great asset for the Bellamy Brothers songwriting, on the new album is a song entitled Lord Help Me Be the Kind of Person My Dog Thinks I Am. Another song is entitled Drug Problem and speaks of how he was drug to church on Sunday morning and drug to work on his grandfathers farm. It kids today had that kind of drug problem I believe the world would be a better place. said David Bellamy. Another insightful tune is Spiritually Bankrupt, with many a reference like Dante walking through Hell, a vagabond walks through a dark valley and finds his hopelessness overcome by calling on God.

The next entertainment event by the Crosby Fair & Rodeo is to be on Saturday, April 11 at the American Legion Hall from 9:00 p.m. until 1:00 a.m. It is a major fund-raiser for the year and will feature a silent and live auction. Entertainment will be Jody Nix and the Texas Cowboys, from the Bandera Area, a large band featuring many songs similar to Jake Hooker.