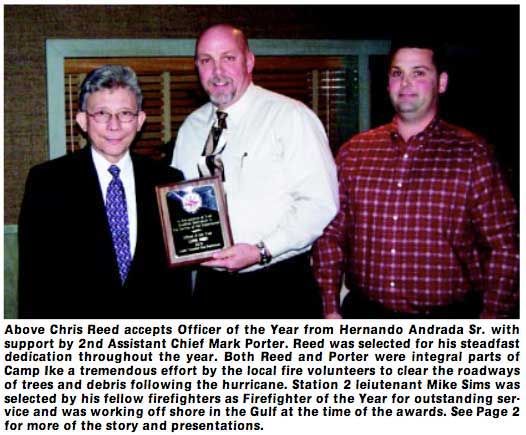 The Crosby Volunteer Fire Dept. held their annual Appreciation Banquet on Jan. 24 at the Monument Inne.

During the invocation H.C. ESD#80 President Commissioner Bob Boyles mentioned the sacrifice of time for the protection and betterment of the community and in no year was this more appropriate than in reference to 2008. In addition to enabling their community to survive the bashing of Hurricane Ike, the department thrived. They replaced 25 year old engine 85 with a new engine 85. A new booster last Summer was put in service as Booster 82. Their work with the Texas Forestry Service got them the latest Jaws of Life for Stations 1, 2 and 5. These stations are now outfitted with the latest in the life saving equipment, all five stations now have jaws of life.

Texas Forest Service also granted a new booster truck with expectation to receive next Summer. Assistant Chief Chris Black submitted for a Grant from the U.S. Fire Act for a Gear Extractor, Gear cleaner, a Gear dryer and 30 pagers. An Exxon Grant purchased for each truck Hot Sticks to check downed electrical powerlines and electrical circuits to determine if they are carrying current. They also bought new safety vests to comply with legislation. Forty new hand held radios were obtained for communication between all apparatus.

No major personnel injuries occurred during the year. The golf tournament raised about $8000 for scholarships for the local high school. Some $6000 was raised at benefits for uniforms and jackets.

Harris County ESD#80 announced their intent to build a new fire station on the Feeder Road of U.S. 90, that is to be just unbelievable. The new station is to be centrally located for all of the fire district and expected to be state of the art.