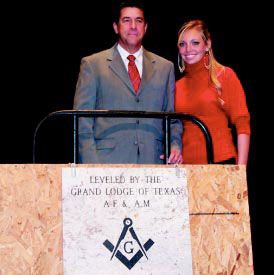 EAST HARRIS COUNTY  Drawing on a theme of unity, the staff and students of Goose Creek Memorial High School opened their doors to the community this week for a dedication ceremony.

The third high school in the Goose Creek CISD, Memorial is the first high school to open in 40 years. The ceremony opened with School Board President Carl Burg welcoming guests and elected officials.

Al Richard, Memorials principal, said that this occasion marked the pinnacle of his 25 years of service to the school district. Richard spoke about the crash course in construction that he had to take, while learning a most important lesson, Our greatest asset is our students.

Megan Adams, class president and the reigning Miss Highlands, spoke of the history-making first year of the school and the many first accomplishments the students have achieved. A two-high school district for so many years, Adams said that while the students who attend Memorial will not forget where they came from they will look to the future and unity. We are young, she said, but united together. We are the school that doesnt give anything less than the best.

Using the traditional tools of masonry: the level, the square, the plumb and the trowel, Masons from the Sampson Lodge #231 in Highlands called on the blessings of the Supreme Architect of the Universe to keep and protect the building and its inhabitants.