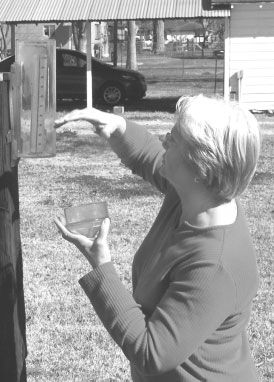 HIGHLANDS  Over the last 35 years Highlands has seen its share of floods, drought and the occasional snowfalland one lady has been there to document the weather.

Letha Strouhal knows more about weather in Highlands than probably anyone in the community. Since the early 1970s she and her trusty rain gauge have recorded rainfall for the communitys newspaper. Strouhal said that the hobby came in the most unlikely way. One day I was reading the newspaper when Mr. (Alton) Neatherlin (then-publisher of the Highlands Star) ran a story that we was looking for someone with a rain gauge. I had a six-inch gauge so I called him and he asked me to start doing the reports and I have done them ever since.

Strouhal, said that she has since retired the original rain gauge. After using that gauge for years, she said, her friend Emil Kaminski gave her official U.S. Government rain gauge that measured up to 12 inches. Thank goodness I have never had it full, she said. Although, she admitted once it got really close. On Oct. 11, 1994 Strouhal recorded 11.375 inches. The following day another 7.67 inches fell. Residents might remember the storms which exposed gas lines under the San Jacinto River, which erupted into fire.

Over the years, Strouhal said there are a few special years that she wont forget.

1983 was real bad she said. Crosby had two tornadoes, Hurricane Alicia hit and Hi-Port burned. In June, 1986, one days rain hit more than 8. This was particularly bad, she said, because Spring Gully rose so fast that it flooded many homes.

Hurricane Ike, by comparison, was not that bad, she said. Ikes heaviest day was 7.6 inches. When Tropical Storm Allison came it dumped 11 over a five day period.

Strouhal is not alone in her weather watching. Two other area residents Lloyd Hargrove and Don Busker also measure rainfall and the three often get together to compare notes.

Over the years Strouhal said that if one thing has been consistent it is that weather is inconsistent. Rather than a seeing steady increase or decrease over the years, she has notice that the rain comes in cycles. Even the heaviest months dont seem to have an overall impact, because usually they will be followed by months of drought.

In 1994 for example, Strouhal said that October alone had 25 of rain. For the year the total was 68 If one were to take away that one month, she said, 1994 would have been one of the driest years in recent memory.

Then there is the odd year, such as last Decembers snow. How do you measure rainfall when its snowing, she asked with a grin.