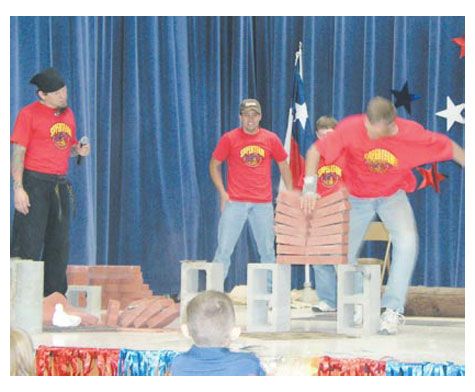 HIGHLANDS – The Pilot Club held their 11th Annual Community Fair last Saturday, and it seemed the whole town turned out for this festive and much anticipated event. The event at the Highlands Elementary School was from 10 am to 3 pm.

The usual fare was present, including a great Barbeque Dinner, Live and Silent Auctions with many more items than usual, and music, crafts booths, organizational exhibits and booths, and a raffle with prize drawings.

This year there were some new features to the event, including a Breaking of the Blocks by the SuperTeam from First Assembly of God Church, and a music presentation by the Show Choir from the new Memorial High School.

Other events included a drawing for two bikes and helmet, one for a girl, one for a boy. Cheyanne Mohler won the girls prizes, and Brandon Shoemaker won the boys prizes.

There were five door prize drawings, health checks by the fire department, Sheriffs office safety information, information about the Heritage project, childrens I.D. and fingerprinting, and for kids there were race games by the Boy Scouts, train rides, face painting, and a clown.

Music was presented throughout the day, starting with an opening song by Selena Shoemaker, and songs by Brendan Boudreaux, David Sabon, and the Memorial Show Choir.

Monies raised by this benefit will be used by the Pilot Club for local community working projects, such as scholarships, beautification, library books, school support, and more, according to Fair President Betty Michalsky.

The Pilot Club, both nationally and locally, is tasked to support brain related injuries, and Alzheimers prevention.

At the end of the afternoon, the live and silent auctions ended, and major prizes were drawn. The live auction included some unique items, including signed baseballs by Brett Marshall, Lance Berkman, and Andy Pettitte, and a 2 night stay at the Victorian resort.

Winners of the Rafffle were as follows:

The card draw for a Diamond Bracelet was won by Sue Norris.