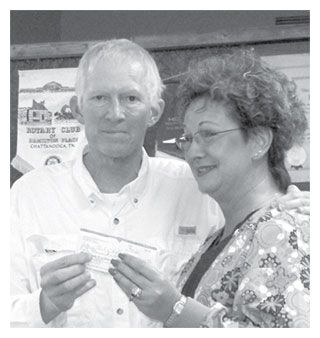 HIGHLANDS  Members of the Highlands and Northshore Rotary Clubs were present at the clubs luncheon last Tuesday, as Mark Mulloy, a Rotarian and CEO/Vice Chairman of the Crosby State Bank, announced a major personal donation to the Highlands club of $50,000.

In making the presentation to club president Patricia Scott, Mulloy reminisced about his roots in Highlands, and his relationship to the Highlands Rotary Club after being recruited by then Rotarian Charlie Farrar to join. He acknowledged the importance that Rotary had become to him, after learning about it in Highlands. Later he joined the Northshore Rotary, and worked his way through the offices until he became president of that club.

During that time, he was in charge of the major fund raiser of the club, the Fish Fry and Raffle. He was able to increase the fund-raising goal from $100,000 to $300,000 during his tenure, and the club has maintained the proceeds in that area ever since, he said.

Mulloy has always had roots in the Highlands community, starting with his ownership of Highlands State Bank, and later Woodforest Bank and Crosby State Bank. Recently he sold Crosby Bank to Beaumonts CommunityBank of Texas, which will become the new name of all ten Crosby Bank branches in October of this year. The Crosby State Bank tradition goes back to its founding in 1913. Mulloy has grown the bank from 2 locations when he became CEO, to the current ten locations.

Mulloys philanthropy continues a tradition of the last few years, as he has been a benefactor of the Highlands and Northshore Rotary Clubs, the Houston District, and the Rotary International Foundation.