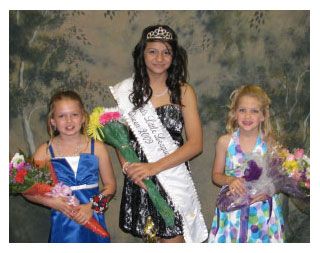 The pageant recognizes the fundraising efforts of the teams. Grant Slusser, president of the Highlands Little League, said that they do not receive any outside funding, and that operating expenses are paid through candy sales, BBQ sales, Play Day and the various events hosted by each team.

The Major Cardinals raised $11,500 earning the Little League crown for their contestant Delila Rubio. Cassandra Weber, with the Major Indians, placed second with $9,700. The Minor II Yankees and contestant Cora Beth Maris came in third with $6,600.

During the pageant, some of the girls competed in the optional talent contest. (Click here for photos.)

Earlier this year, the league held a Play Day and Home Run Derby. Mickey Masterson announced the winners at the pageant.