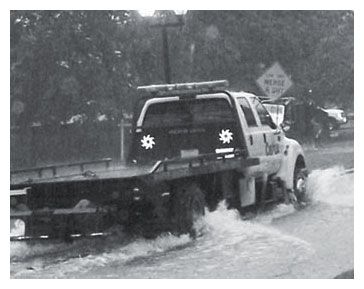 Flash floods last Saturday turned familiar roads into strange streams. Rapidly climbing water in Newport and Indian Shores caused the fire volunteers to erect barricades to warn of high water. Rain reached 6 inches in Crosby by the afternoon. Hare Road became so impassable the library closed early. Above a wrecker truck takes the higher inclines of South Diamondhead to rescue one motorists vehicle, while others scurried past undaunted.