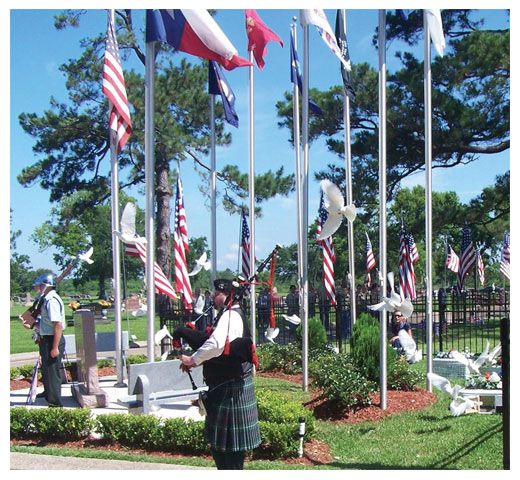 HIGHLANDS  A rare day if ever was more scenic than the morning of May 25 when Sterling-White Chapel hosted a Memorial Day Service as joyously beautiful in natural flora as it was in man made vistae.

Services were initiated by the local JROTC under Sergeant Tim Meadows direction placing a wreath at the Wall of Honor which sports flags of each branch of the service in addition to Old Glory.

Old Glory herself was then raised in the center of The Avenue of Flags which features flags that have flown over this country and servicemen before it was a Democratic-Republic as a nation. This Color Guard and Pledge of Allegiance was performed by Boy Scout Troup #107 under the direction of Earl Dickey.

Funeral Director Jeff Moore then briefly offered welcomes and orientation for visitors on behalf of Sterling-White Funeral Home and Cemetery. All matters of faith were the providence of Pastor Jerry Hovater including the prayer and dedication of the ceremony including sermon.

The Roll Call was performed by Don Guillory of Crosby American Legion Post 568. Taps was played by Dana Red with a jazz twist. Pipe Major Tom OBrien played Amazing Grace as doves were released throughout the cemetery.