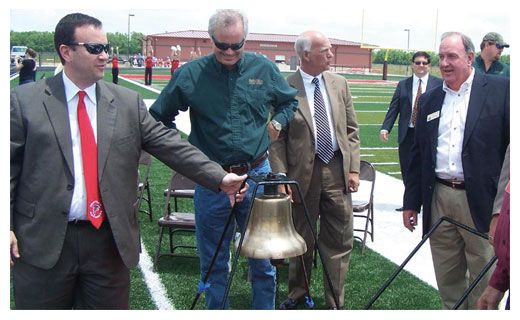 The Falcon Stadium features seating for 5,000, a scoreboard with jumbotron, high definition DVD and instant replay capability and the latest in artificial turf. Each board member will tell you that it is built to last and built to grow. Jerry Jones indicates Its been a long time coming. It is going to be sufficient for this community for a long time. The community should be proud.

Dr. Doug Killian, district superintendent, presided over the ceremony. Athletic director Mike McEachern asked about his new duties said, Its an incredible responsibility, weve shown several athletic directors this facility and they have each responded wow! It is tops in the State of Texas especially for a 3A school.You look at the track, the tennis courts, the weight room which is twice the size of the one we have come from, but it is the press box that gets everybodys attention, really. We especially love the turf, its soft, safer. We know if it rains ten minutes later we are back out on it playing. Ours will rival any in the state with the track and facilities.

Invocation was done by brother Mike Martin of First Baptist-Huffman. After brief speeches of recognition of support by the community a complete barbecue lunch was served to guests.

A chat with Guy Smith, Assistant Secretary on the Huffman ISD Board, This is the greatest, my family has been on the Huffman Board of Education for three generations. My dad helped his dad plow Spense Stadium when Huffman was starting a football program. We outgrew Spense Stadium 10 years ago. I played football here in 1996, when we had to put in extra stands, there is just no real estate there for parking at a high school game. We are eventually going to add more parking here so that visitors and home fans do not have to intermingle. The construction is modular to accommodate growth. The board bought stands that are a little wider and less cramped for the viewer and backs can be added to those seats if we need. The board picked specifications that were versatile, we can always add more. The technology is another long run feature. Not only will we be able to record games but at graduation we will probably be able to pipe the view to audiences inside the high school for those that dont tolerate the heat well.

The administration building, will not only house offices but also serve as the hub of the districts technology department or network operations center.

According to Jerry Jones, We knew we needed to do something with the facility, it had become a safety issue also and the community voted 72% to allow us to make this possible, this is what they said they wanted and the votes came in at a wide majority to support these projects.