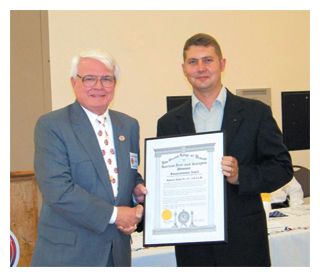 HIGHLANDS  The Community Center was the site of an overflow crowd of well-wishers, as the Masonic Sampson Lodge No. 231 took note of their 150th anniversary with a chicken dinner and a prestigious ceremony attended by many statewide Masonic officials and current and past members of the local Lodge.

Hosted by current Grand Master Travis Major, the ceremony was a pleasant reminder of the accomplishments of the lodge over the years, and a look back at a rich history that involved many of the pioneers of the State of Texas.

A Proclamation honoring the Sampson Lodge on their 150th anniversary was read and presented to Grand Master Travis Major by the Grand Master of the Grand Lodge of Texas, W. David Counts, Jr. Counts told how Masonry was the oldest fraternal organization in the world, the largest, and the most philanthropic. He said the goal of Masonry is to take good men and make them better. He spoke of the Masonic core values, and how Masonry emphasizes fellowship and brotherly love.

Counts had a framed Proclamation commemorating the occasion of the 150th Anniversary on June 16th, and todays celebration.

It read in part: Sampson Lodges 150 Years of Masonic service crafts a heritage of virtue for its members and a shining example for the Masonic Fraternity.

In addition to the Proclamation ceremony, the audience was treated to live Blue Grass music by Before Electricity. Cooking for the event was by the Henderson Cook Team, and other volunteers.