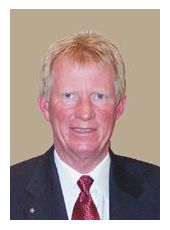 Many in East Harris County were touched and sorrowed by the news that Mark Mulloy, well known businessman, Rotarian and iconic member of the community, had passed away on Sunday morning, ending his valiant battle with Melanoma skin cancer. His friends, banking associates and fellow Rotarians had followed his struggle with the cancer, as he was treated for over three years at M.D. Anderson Cancer Hospital. They supported him with a show of wrist bands and prayers.

When the opportunity arose, he purchased part ownership of Crosby State Bank, and led an expansion program for that institution that resulted in eight branches throughout the east side of the county. He sold the bank last year to Beaumonts Community Bank of Texas.

His career included banking, a law degree, and most importantly an overriding interest in Rotary, both on the local and the international level. He assumed a leadership role in his Northshore club and the District, and made friends and admirers as he went. However, he continued his Rotary friendship where it started, in Highlands, recently donating $50,000 to the local club for their use in community programs. He had continued over the years to be a strong supporter of the Chili Feast, Highlands main fund raiser.

Mark was a devoted family man, who leaves behind two outstanding young boys and a loving wife. As busy as he was, he always remembered to inquire and keep track of other peoples families and interests.

In anticipation of the many friends who will miss him, the funeral arrangements have been set in large venues so that many can attend.

Mark George Mulloy, 51, beloved husband, father, brother, son and friend to many passed away peacefully at home on Sunday, June 21, 2009, after a 3 year courageous battle with Melanoma skin cancer.

Mark was BOI  born on the Island of Galveston, Texas, February 21, 1958 to Dr. Wayne G. and Monica Mulloy. Mark spent his early years at Green Valley Elementary and graduated from Northshore High School in 1976 and later attended Texas A & M University and Sam Houston State University, obtaining a Finance Degree which started his long banking career and led to a law degree from South Texas College of Law.

Mark was an exceptional man, husband and father. He was devoted to his family and also had a very large circle of long time friends and business associates, some of whom have known him since elementary school. With a winning smile and a personality to match, Mark was a person to whom others were drawn. He had a natural talent for interacting with people and touched so many lives.

Mark loved life. He wasnt happy unless he was going Mach I with his hair on fire. He loved many outdoor activities such as hunting, fishing and golf. He was quite the marksman and hunted all over the US, South America, and even his own backyard. Mark also enjoyed fishing and went to Alaska, Canada, through Texas and the coast lines of Costa Rica. He had a passion for golf and loved chasing that little white ball around the links with his buddies. His golf experiences took him all over the US, Ireland, and Scotland and was privileged to have played Pebble Beach, St. Andrews and even Texaco Country Club. He always said you could conduct more business on a golf course than anywhere else and couldnt wait to get to heaven to play again with his buddy, Glen.

As a loving husband and father, Mark, his wife and 2 sons enjoyed many wonderful times together traveling to foreign countries, going to sporting events, seeing America or just spending time in Sargent, America.

The importance of family was a priority for Mark. As a devoted father, Mark coached his sons in baseball, basketball, and golf.

Mark was a very successful banker and lawyer, with a banking career spanning more than 25 years. After graduating college with a Finance degree, Mark became a state bank examiner which led to loan review at First City and Enterprise Bank. Mark became President of Highlands State Bank before the age of 30 and later bought the bank and merged it with Woodforest National Bank. Being a people bank with people person, he bought and became CEO of Crosby State Bank and most recently sold it to Community Bank of Texas. He loved his extended banking family and many of them have followed him and worked with him for over 20 years. Mark was a true visionary and his strength of character was greatly admired by so many business associates, which contributed to his many successes.

Mark was a philanthropist and had a huge heart when it came to giving. His biggest passion was Rotary. With Rotary, he knew he could help and touch the lives of thousands of people, not only at home, but all over the world, and did just that. He became a member of the Rotary Club of Highlands and then later, moving to the Rotary Club of Northshore and was one of their most successful Presidents in 2001-2002. He enjoyed fundraising and travelling with Rotary, having raised huge amounts of money and travelled to Nicaragua and Chile, but mostly helping people on the East side of Houston. The Rotary International theme during Marks year as club president was Mankind is Our Business. Mark lived his life in this with a deep understanding of this standard, along with Rotarys motto of Service above Self. Mark set the bar high for all Rotarians and their friends to follow.

Marks family and friends fondly remember him as a loving, strong, fun man of character and many talents. So many people will always remember his kindness and big heart and a personality as bright and winning as his natural smile and laughter.

Mark is survived by his loving and devoted wife of 19 years, Carolyn, his 2 sons, Clayton age 14 and Matthew age 12. He is also survived by his parents, Dr. Wayne G. and Monica Mulloy and mother-in-law, Agnes Winans. His brothers Mike Mulloy and wife Lynn, Jeff Mulloy and wife Susan, and John Mulloy. His extended family included brothers-in-law Mike Winans and wife Amy, and Daniel Winans and wife Andrea, sisters-in-law Cindy Risner and husband Bruce and Rissy Winans. He will be greatly missed by his nephew, Mason Mulloy and nieces, Lauren Mulloy and Katie and Kelli Mulloy, Katy Winans, Melissa and Stephanie Winans and Brooke and Heather Risner.

For those desiring, memorial contributions may be made to Northshore Rotary Charitable Foundation, P O Box 9635, Houston, Texas 77213 or the Melanoma and Skin Center at MD Anderson, PO Box 4486, Houston, TX. 77210.

Mark Mulloy, CEO of Crosby State Bank, and a well known businessman in the East Harris County, Crosby and Highlands communities, succumbed on Sunday, June 21, 2009 after a long battle with cancer. He was active in Rotary and a member and past president of the Northshore Rotary Club.

Funeral arrangements are now complete. Mark’s family invites friends to visit and share memories from 5:00 to 8:00 pm on Wednesday June 24 at Fellowship of the Nations Church, 13305 Woodforest Blvd. Houston 77015. A Celebration of Mark’s life will be held at 1:00 pm on Thursday, June 25 at the Humble Civic Center, 8233 Will Clayton Parkway, Humble 77338. A reception will follow at the Civic Center. Private graveside services will be at San Jacinto Memorial Park.