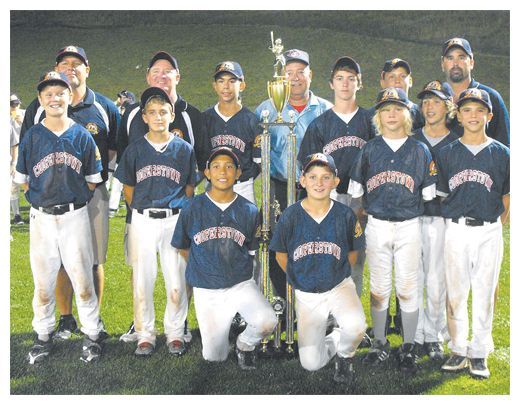 HIGHLANDS  On the week of July 11  July 17 the Cyclones journeyed to Cooperstown, New York to participate in the All-Star Village Tournament. This team consisted of 10 players from within a 30 mile radius of Highlands.

This team faced teams from all over the United States and one team from Canada. The Cyclones overall record was 10-0. The boys battled in the championship game from a 3-run deficit to make a come back with three consecutive home runs to tie the game and ended up winning 11-10.

The Championship Game was against Victory Baseball from IL.

Once this happened the offense was fired up. More base hits were made by the Cyclones and going into the top of the 6th we were up by two making the score 11-9.

Stelzer was the last run to cross the plate to secure our win. Victory was batting and scored one run to make the score 11  10.

The teams defense made great plays to get two outs and our pitcher Mason Furlong struck out their #4 batter swinging to gain the team the final out and win the Championship.

Stelzer won the Home Run Derby with 10 Home Runs Colby Shumaker won second in the Round the Bases race. Andrew Fregia with the help of a great defense pitched a no hitter in game # 6. Austin Pulcher, Matthew Bumpas, Shannon Broussard, Hunter Hamm, and Jared Nolan hit their first ever home runs in Cooperstown Colby Shumaker, Hearn and Fregia each hit a Grand Slam.

As a team they scored 135 runs and only allowed 23. Each member of the team was inducted into the Cooperstown Youth Baseball Hall of Fame. This experience was a chance of a lifetime for them and they are to be commended for the way they represented their community.

Special thanks go out to Brian and Shawna Hamm. Brian has been the Head Coach of this team for the past 3 years and all of his hard work and dedication has been put forth to bringing the skills and talents of these players together as a team.