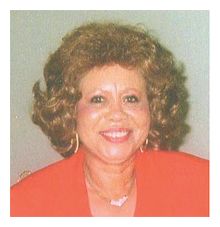 BARRETT STATION — All former Charles R. Drew alumni, Crosby High School alumni, current and former residents, family and friends of Barrett Station and neighboring communities are being invited to an annual homecoming reunion banquet that is being hosted by the Barrett Station Civic League.

This year, Georgia Provost, Charles R. Drew alumnus, has been selected as the guest speaker.

If there is a legend in Houston, Texas it is certainly the professional photography of Georgia Provost and Provost & Associates. Professionalism and high quality are the hallmark of her work. The studios of Provost & Associates contain photographs that show the rich culture and history of not only Houston, but Texas, Louisiana and all parts in between. Her photographic firm has been chronicling the Houston community and many communities with portraits and photographs for 61 years.

Provost is a motivational speaker and a community activist who has participated in the cultural, educational, humanitarian, political and religious/ spiritual sectors of Houston life. She is a champion for the youth of Houston-Harris County. She is the consummate community volunteer and a part of the dynamic fundraising team of Helfman and Provost.

For over twenty-five years, she and Alan Helfman, General Manager of River Oaks Chrysler Jeep, can usually be found working to raise money for youth and charitable organizations.

Georgia is the executive director of the Youth for Christ Foundation and the Texas Southern University Bayou Bend Alumni & Ex-Students Association Inc., (Friends & Supporters). In 1998, she established the T. F. Freeman Ministers and Laity Summit and the Male Chorus Gospel Extravaganza called A Gathering of Black Men, which raised funds for the International Championship TSU Debate Team coached by Dr. T. F. Freeman. Georgia carries a level of certainty with her that is a valuable commodity in a society that has been labeled as corrupted.

Provost is a proud graduate of Charles R. Drew High School and Texas Southern University and was inducted into the Wall of Honors at the TSU School of Technology. She pursued advanced studies at the University of Houston and is a graduate of Winona National School of Professional Photography. Provosts faith and identity as a catholic and a black woman are at the core of everything she is and does. She is an active member of the Our Mother of Mercy Parish, serving as coordinator of the Civil Rights Education Classes; president of PICC and a member of the Pastoral Council. Youth is her game, developing Christian values, leadership and common sense among youth.

She has been honored with numerous awards, including five Business Woman of the Year and six Youth Leadership awards. It is evident that she truly lives her philosophy of life; Faith combined with hard work equals success, doing all things with love.

A woman of valor and courage, Provost is a native of Lafayette, Louisiana, the widow of the late Herbert J. Provost, TSUs International Championship Collegiate Tennis coach, and she is the mother of Jerome, also a professional photographer. Surely, the residents of Barrett Station will be honored by the presence of one of the communitys own successful products, Georgia Provost, on the evening of July 24, at the Barrett Station Community Center  808-1/2 Magnolia.

Come and hear this great speaker, beginning at 7 p.m.! For information regarding purchase of tickets (@ $30/each), contact Melody Fontenot  league president, at [281] 328-2289; or the vice president, Katie Reed Roberson  [281] 328-5937; or Willie B. Goodlow. Proceeds from this event will be used for the award of scholarships to the communitys youth.