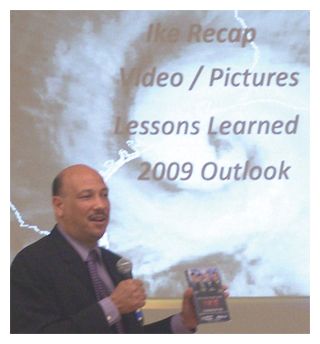 Gene Norman of KHOU-TV spoke at the Crosby/Huffman Chamber of Commerce Luncheon on July 16 and recapped coverage of Hurricane Ike.

While everyone that was here has vivid memories of the back side of the eyewall of the storm, Norman reminded us with video and photographic reports. The eye of Ike crossed over this area and that the back of the storm was far more powerful than the front. The Saffir-Simpson Scale that indicated the intensity of winds and tidal surge of hurricanes will from now on indicate wind intensity only, Ike showed the tidal surge of a Category 4 hurricane with sustained winds of no more than 95 m.p.h. Norman explained that while plants seem to show twisted winds, While there were isolated twisting winds, there were no tornado signatures.

National Weather Service Forecast Office recap of Hurricane Ike by Scott Overpeck said, The reflectively data from the NWS Houston/Galveston radar showed that Hurricane Ike had several small vortices within its eye wall structure. Velocity data and storm relative velocity maps did not indicate any strong areas of rotation within these vortices. It is possible that as Hurricane Ike made landfall that these vortices did produce brief tornadoes that were too small and weak for the radar to detect rotation. The NWS Houston/Galveston did not issue any tornado warnings until 446PM CDT 13 September 2008 as a line of storms was moving through Liberty County associated with a front wrapping around Hurricane Ike. There were no tornadoes reported with the storms.

While the NWS Houston/Galveston received public reports of brief tornadoes during Ike weeks later, there was no way to confirm these reports. Ike caused extensive wind damage across southeast Texas which would mask any tornado damage. One would not be able to distinguish between hurricane wind damage and tornado damage. In summary, while there may have been brief tornadic circulations, radar data and storm damage could not confirm that Hurricane Ike caused any tornadoes in Southeast Texas.

Norman forecast that it is unlikely many hurricanes will appear this season, although he warns that all we need is one and you will be talking about it for years to come. In an El Nino season, hurricanes are scarce because waters of the Equatorial Pacific are warming allowing the Jet Streams to sink down across the Atlantic producing wind sheer. Also there has been no three year hurricane seasons in Southeast Texas since the 1940s.

The three components of being ready are make a plan, build a kit, and stay informed. The plan should include a decision Should I stay or should I go, water stock of a gallon of water per person for up to two weeks, nonperishable food stockade, get a generator.