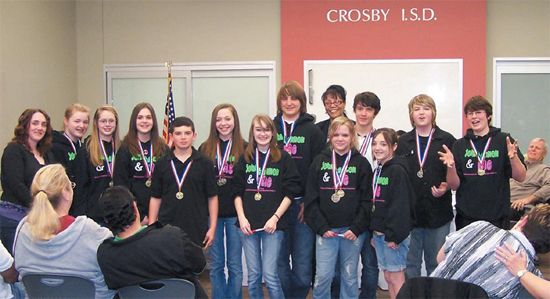 CROSBY  An exhaustive, regular Crosby I.S.D. board meeting was held Monday night, March 22 that was packed with parents and students for the recognition of Drew and Crosby Middle School students. They participated in the University Interscholastic League accomplishments at the March 6 competition. The meeting was extended through two executive sessions about personnel changes, recognition of the students who went to Hawaii on a Band trip, highlights of the efforts at Barrett Primary, the painstaking technology updates for application to the schools and the architects presenting schematics for renovations to each of the campuses.

Finance Superintendent Diane Fleming received most Kudos for her role in managing finances to show that the district was sound enough to sell bonds at the most advantageous rates available. Doug Whitt reviewed Bids on the Maintenance Tax Notes and Adopt the Order Authorizing the Issuance of Notes for $7.2 Million to be used for renovations to each of the campuses.

Review followed of the schematics of CRE8 architect Jerry Bevel, for renovations of existing school buildings to derive the most use for the space available. The discussion lasted over one hour alone. A more detailed story about the proposed changes and the boards likely amendments is much too lengthy for here but considerable work is going into adjusting to technological advancement and changing space within existing schools and playgrounds, including some changes for immediate needs.

A report on Math, Science, and Lifeskills Stipends was approved per advice of the Superintendent. Textbooks were adopted unanimously.

The Board submitted votes for a candidate to Region IV Board of Directors.

JoAnne Carfield and David Haapala presented updates on the on-going explorations of the Technology available and/or feasible for Crosby ISD, as the committee continues to review how to spend the funds.