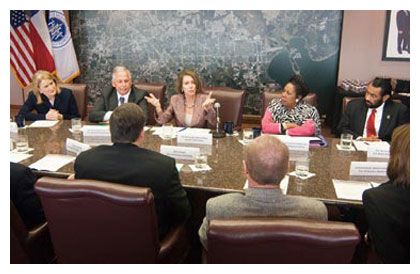 The Port has received $98.8 million to address critical needs by building dredge material and placement areas, and $2.8 million through the Diesel Emissions Reduction Act (DERA) program. These funds have all been supplied by ARRA.

I am happy to see Speaker Pelosi here at the Port with an active interest in our local economy, said Green. ARRA has made, and will continue to make, a huge impact on our area.

ARRA has also awarded money to benefit early education in the Houston-area. Head Start of Harris County has received $632,544 and Early Head Start/Head Start of Gulf Coast Community Services has received over $1 million; all of these funds are to boost current programs of social and cognitive development in children. Harris County Department of Education has additionally received $881,002 to expand their current operations to provide for a greater number of low-income children.

The American Recovery and Reinvestment Act is responsible for a $50 million award to build two direct connectors at U.S. 59 and Beltway 8 and the direct connector in Baytown from State Highway 146 to Spur 330. The Texas Department of Transportation projects will allow for greater traffic flow while easing congestion and drive times.

In October of 2009, the Department of Energy awarded a $200 million grant to CenterPoint energy to begin the first phase of its Intelligent Grid that will improve operational efficiency and reliability. The funding was made possible by ARRA and will sponsor a range of technologies. CenterPoint has been a pioneer in developing a Smart Grid program and will begin with much of Houstons critical infrastructure.

The State of Texas has received in excess of $12 billion, funded entirely by ARRA. Without these resources, our state wouldnt have been able to balance its checkbook, Green stated. These funds will continue to help our local and state economy stabilize during the economic downturn, and bring even more needed jobs to our area.