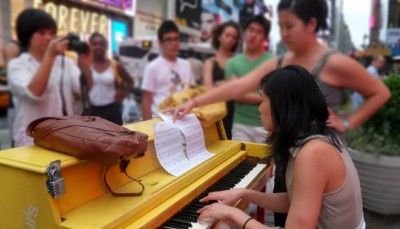 Hordes of tourists and natives alike crowd Times Square at any given part of the dayin my case, 7 p.m. on a Monday after work. My friends were standing around a sunshine yellow piano located right at the epicenter of Times Square, and a professional pianist was delighting the crowd with his masterpiece. As I listened, my heart sank to my stomach and my hands were shaking.

Youre next, Angie, one of my friends said with a nudge.

Suddenly this didnt seem like such a good idea.

I was one of those children that you had to force to sit at the piano to practice. Sometimes it involved screaming. Eventually I realized the minimal amount I had to practice each week to get by in my piano lessons. Then when I started college, there were no more lessons or practice sessions, and suddenly, I realized how much I loved (and missed) playing the piano.

In college, my friend Jenn and I would storm the private music rooms on campus to play all our old classical pieces and attempt some current hits. Later, my boyfriend at the time lent me his weighted keyboard so I could play in my bedroom. This became especially beneficial whenever I felt stressed and needed to let my emotions flow from my head and my heart and out through my fingers.

Moving to New York, I had to forego making music. Due to lack of transportation, space, and time, I returned the weighted keyboard and stopped playing. After a few months, I started getting antsy and looking up piano room rentals at local theatres. So when New York hosted a two-week art installation project of free pianos open to the public around the city, I knew I had to play.

There was only one problem: stage fright. As much as I love playing, I am terrible with large crowds, something that is unavoidable in New York. When it comes to piano, I view playing as a personal fulfillment and only choose to share it with a few close friends. The thought of performing in front of a large crowd of strangers creates a terrible anxiety and nervousness. Luckily, Jenn happened to be visiting and I told her of my goal to participate before the installation ended in July, and she happily agreed to support me.

On our first attempt, we walked in the dead of night to one of the free pianos at Central Park. My logic was this: Its late, so not as many people will be out, and its dark, so they cant really see me. But somehow my logic did not factor in that the piano would be locked during the night.

The next day I made my second attempt, more determined than ever. I discovered that there was a closer piano in Times Square, so I decided if I was going to do play somewhere, why not one of the most heavily trafficked locations in the world?

Jenn and a few friends stood eagerly near me as the pianist finished his piece. As my other friend nudged me, I looked at Jenn. I wasnt sure I wanted to go through with this, but she smiled to give me confidence and encouragement. Even the professional said, This piano is for you to play.

And he was right.

Despite my nervousness, and even my mistakes, I sat on the bench and played. I played because I could make music. I played because it made me happy. I played until the piece was finished, the crowd applauded, and I turned and smiled.