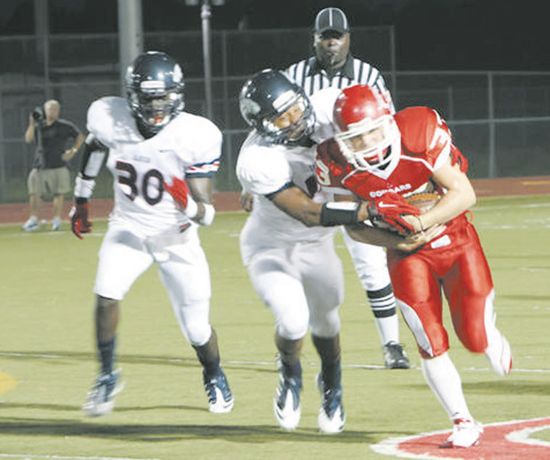 CROSBY– The Crosby Cougars were unable to get their running game going as they dropped their third straight game of the season 28-0 to the Pearland Dawson Eagles.
The Cougars managed 74 rushing yards on the game, off 23 attempts. Leading the way was Quarterback Dominic Merka who accounted for 30 yards on 11 runs.
By comparison, the Eagles rushed for 271 yards, 171 of those coming from Payton Jones.
Unable to run the ball effectively, Crosby turned to their passing game. Merka completed 8 of 34 passes for 117 yards.
Dawson opened up the scoring in the first quarter with a three-yard run.
Two more rushing touchdowns in the second quarter made it a 21-0 score at halftime.
The Eagles Garry Kimble did not have many completions in the game, but in the third quarter he made one count with a 40-yard touchdown pass.

The Cougars defense had high points in the game, as they held Dawson to 76 passing yards. They also forced two turnovers and three punts.
The team has the week off as they prepare to host their district opener against new opponent Baytown Lee on Sept. 24.
Although the Cougars will open the district season with an 0-3 record, preseason has been tough for several within the district. Going into Friday nights game, last years playoff teams: Crosby, Dayton and Goose Creek Memorial have a combined 0-8 pre-district record.
Dayton plays Aldine Eisenhower this week.