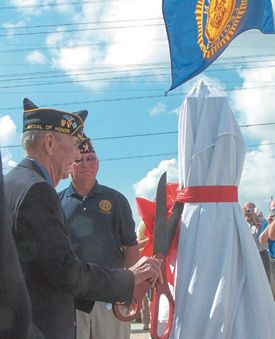 By LEWIS SPEARMAN
CROSBY  A mass of people from throughout the United States came to visit with a local man that served his country in daring ways for most of his life.
David McNerney, Clarence Sasser and Mike Thornton all Congressional Medal of Honor Recipients attended a special monument dedication at American Legion Post 658 here last Saturday, they were joined by many of the men that served that auspicious day in 1967 with McNerney. Vice-Commander Don Guillory opened ceremonies with a welcome.
Rev. Richard Amador pronounced the invocation. Flag colors were posted by Crosby H.S. JROTC, which is most appropriate since a new $3 M. JROTC building will be named after McNerney once completed.

Colonel Rick Sauer, a Silver Star recipient from his service on that fateful day in Polei Doc, led the Pledge of Allegiance. Gerald Blankenship, Crosby ISD trustee was key organizer of the dedication and the petition to name the JROTC Building for McNerney.
American Legion Officers and visitors were introduced by Vice-Commander Don Guillory and Gerald Blankenship introduced elected officials, and candidates for Texas District 127.
Gene Warden, Commander of the Texas American Legion gave a Medal of Honor Certificate and Gary Alexander gave e Medal of Honor Host City. Following, the crowd sang God Bless America lead by a recording of Kate Smith. Then all congregated for refreshments.
McNerney got his first of five Bronze Star in Korea in the U.S. Navy. He joined the Army in 1956. He served as advisor to the Army of Republic of Vietnam Nationals 1962 through 1969.
In 1970 he became a U.S. Customs Inspector. In 1985 he made history by interdicting 4 tons of marijuana inside the Port of Houston. Houstons largest bust.
His unit was attacked by a battalion of Viet Cong and North Vietnamese regulars March 22, 1967. His daring under a fusillade of enemy fire, being wounded by an explosion, taking command of the unit, directing fire, preparing an evacuation landing, communicating artillery coordinates successfully won the two day battle.
I was a professional soldier. But, I really never though I was going to be seriously hurt by amateurs. the finest man Ive met told this reporter.