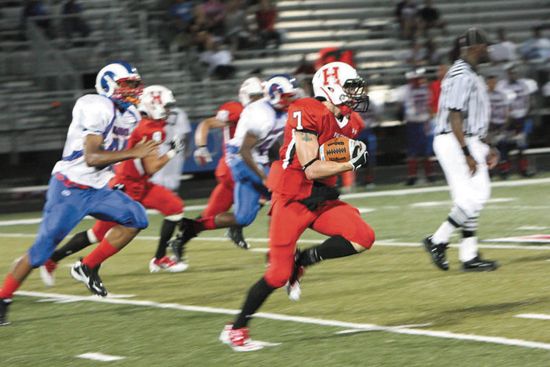 HUFFMAN– The Hargrave Falcons racked up nearly 600 yards of offense in their 45-12 win over the Kashmere Rams Friday night.
The win gives Hargrave a 2-0 start on the season.
Just over two minutes into the game the Falcons fans jumped to their feet when Cole Berry completed a pass to Riley Julian. Julian then streaked 76 yards for a touchdown.
Cade Hardy ran in the two-point conversion for an 8-0 lead.
DeBerry completed 13 of 22 passes for 258 yards. Julian had four catches on the night for 95 yards.
Five minutes later DeBerry found Casey Martin who scored on a 77-yard pass. Cannon Cotters kick made it a 15-0 game.
The Falcons continued to pound the Rams in the second quarter. Taking the handoff at his own 41 yardline, Matias McCloskey drive the length of the field for a 59 yard touchdown run. A missed extra point left the score at 21-0.

While the Falcons offense was moving the ball, the defense used turnovers to keep the Rams at bay. Hargrave recovered two fumbles and caught two interceptions.
The biggest interception of the night came shortly after the McCloskey touchdown.
On the Rams next possession Anchor Ebaks intercepted an Anthony Wiltz pass and returned it 31 yards for a touchdown.
Martin closed out the scoring in the first half with a 59 yard run to give his team a 35-6 halftime lead.
In the third quarter Cotter came through again with a 17-yard field goal and a 38-6 lead.
Hargrave would score once more when Joel Witwer pulled in a 21-yard pass from DeBerry in the third quarter.