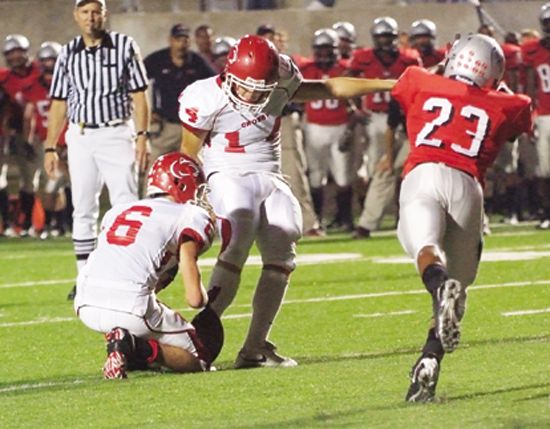 CROSBY– Never take an extra point kick for granted.
After fighting themselves out of a 28-13 hole, Crosby (4-4,4-1) thought they had Goose Creek Memorial (2-6, 2-3) beat when Dominic Merka crossed the goalline as time expired, tieing the game at 34 points apiece.
All Crosby needed to do was kick the extra point and they would escape with a win. The Patriots had other ideas as they blocked the extra point, forcing overtime.
As final seconds tick off the overtime clock Deandre Durden completed an eight-yard pass to Chris Cowen to secure the win.
Crosby took an early lead in the game when Merka (11-23 for 126 yards and two interceptions) threw an eight-yard TD pass to Forrest Tyler.
Cody Schumaker tied the game for Memorial with a one-yard TD run in the second.

Sixteen seconds later and a change in possession, the Patriots were back in the end zone thanks to Isaiah Wimberlys 32-yard run.
Crosby pulled within a point when Jacoby Scott powered his way in from the one-yard line.
Memorial strikes once more before the end of the first half. With 12 seconds remaining Durden completed a 27-yard catch and run to Charles Simpson.
This gave the Patriots a 21-13 halftime lead.
Memorial improved that lead to 28-13 in the third quarter on Durdens 41-yard touchdown pass to Simpson.
Crosby outscored the Patriots 21-6 in the final quarter.
Merka, who led his team with 126 yards rushing, scored first with a 30-yard run.
The Patriots pulled away a little more with Durens eight-yard run.
In the final six minutes of play, Crosby scored twice more. The first score came on Merkas 55-yard pass to Tyler. Then, as regulation-time expired Merka pushed his way in from the one-yard line for a touchdown and a tie game.
Darwin DeJean blocked the extra point attempt sending the game into overtime.
The win dropped Crosby into second place. For Crosby to have a realistic shot at a district title this year, they will have to beat Dayton on the road this week. They would also need help from Memorial, who plays Barbers Hill this week. Then Crosby faces Barbers Hill.According to Coach Kevin Flannigan , Both of those teams are good at what they do, to win we have to execute what we can do.