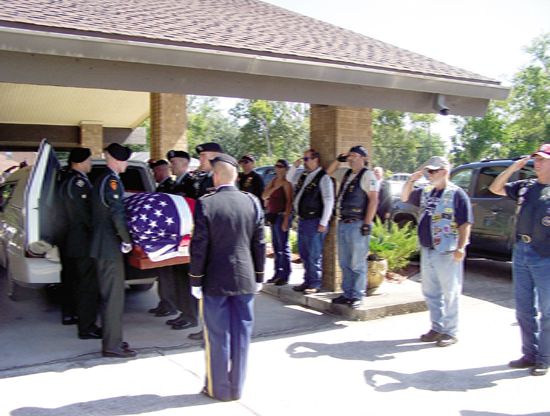 By LEWIS SPEARMAN
CROSBY  Lest we forget that a loss of real person with a ready smile and quick humor, as deeply honorable and at the same time likable passed away on 10/10/10 and left this area last Saturday en route to Houstons Veterans Memorial Cemetery.
Individuals sparsely lined Crosby Freeways Access Road with a Banner at Runneburg in route to Houston per a suggestion on the Crosby/Huffman Chamber of Commerces website that day. A troop of over 180 motorcycles made their way down the path to get on the Crosby Freeway proper at the start of the procession to the Veterans Memorial. Southeast Texas Patriot Guard Riders not only organized that troop but also provided a saluting guard on hand as the casket bearing McNerneys remains into the hearse that would transport him to Veterans Memorial.

David McNerney participated in this community and remembrances, monuments are left here of his service to the local legion and a fond memory of who he was and how he lived the definition of honor.
On Sept. 11, this year, American Legion 658 in Crosby hosted a special ceremony attended by McNerneys fellow combatants from Poli Doc, South Vietnam where he earned the Congressional Medal of Honor, according to former President L.B. Johnson on March 22, 1967. He was attended by William Sasser of Boulder, Colorado also a Medal of Honor recipient who returned to Crosby last Saturday to pay final respects. Other highly decorated veterans were welcomed to Crosby concerning the American Legion 658 placing an obelisk with McNerneys image on each side as memorial to his service to the community and nation.
Many services were organized by his best friends including Jerald Blankenship. Who presided over much of Saturdays procession outside services and Eucharists preformed by Priests at Sacred Heart Catholic Church including Father OConnor.
The liter that would bear his remains at the Houston ceremony had stayed inside Crosby Fairgrounds from Oklahoma by a special Medal of Honor Unit of the U.S.Army.
He told this reporter that he declined to take chemotherapy for the lung cancer that he was diagnosed to have last January because he had never seen anyone recover with it. He indicated that the cancer came from who knows, maybe from agent orange over there or from being around all those ships for so long, nobody really knows.
On Tuesday September 7, 2010 the Crosby High School JROTC department conducted a ceremony that designated the future JROTC building in honor of First Sergeant David H. McNerney then one of only 87 living Medal of Honor recipients.
A JROTC program officially began in October, 2003 with the hiring of Major Quenton Farr and Sergeant First Class Timothy Meadows. JROTC opened its first class with 167 cadets in January 2004 in one modular building. Since the start of the program JROTC has averaged an enrollment of 116 cadets per year. The JROTC program has earned the highest award of Honor Unit With Distinction on two consecutive federal inspections in 2007 and 2010.
Crosby ISD school trustees voted to build a $3 M. JROTC facility on August 16, 2010, dedicating and naming of the facility the David H. McNerney JROTC Building in honor of Crosbys own Medal of Honor recipient.
Not only his military service was recognized but also he was honored by his longest employer after the military, the U.S. Customs Service under the U.S. Dept. of Homeland Security hosted a special recognition of his service during a July 2 reception at American Legion Hut 658. Honors bestowed included many a plaque, several official documents, jewelry and recognizing of his service in clothing. McNerney says he learned during his service to the U.S. Customs The most valuable possession you have is your name, never dishonor it.
McNerney specialized in being the best drug interdiction officer in Houston during his service there. He helped catch 4 tons of marijuana on a single ship once. He then spent the night guarding his catch.