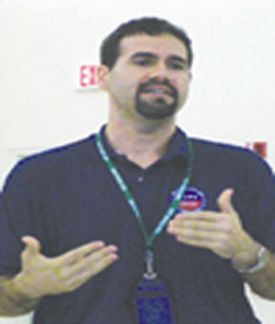 HIGHLANDSEfforts to contain hazardous materials leaking into the San Jacinto River from waste pits could start in as soon as six weeks, says the Environmental Protection Agency.
Speaking to a group assembled Monday in the San Jacinto Community Center, Valmichael Leos, a project manager with the EPA Region 6 office said that depending on the response by International Paper and McGinnes Industrial Maintenance Corporation, which have been identified as the Potentially Responsible Party (PRP), construction on a containment berm could start in six weeks.

The berm, Leos said, would be a barrier designed to temporarily contain the contaminants until a permanent solution can be found. The EPA is asking for a barrier comprised of clean fill (earthen material, sand, rock and gravel) that can withstand a 100-year flood event.
That is the fly in the ointment. The PRPs have responded saying that the site only need only withstand a 10-year event. Leon said the EPA is in formal negotiations with the PRPs to settle the matter, along with other containment issues such as an emergency response plan in the event of a flood or other catastrophic danger to the containment.
The PRPs, Leos said, have two weeks to dispute the EPAs workplan. After that construction can begin in 30 days. Our best case scenario is six weeks, Leos said. He said that once the PRPs submit their plan, the EPA would review it. If it is acceptable, the work can begin. If the EPA wants revisions to the PRPs plan, then they have the right to counter those revisions and negotiations begin again.
Leos said that their primary goal is to stabilize the source and keep t from going into the river. He added that he suspected the PRPs reluctance has to do with the expense of the project. He estimated the cost for the containment the EPA is asking for would be in the $7 million-range. A cost the PRP would have to pay from their own pockets.
Once the construction begins, completion is expected between six and nine months depending on weather conditions.
Located in along the western bank of the San Jacinto River just north of I-10, dangerous waste contaminated with a hazardous substance commonly known as dioxin, lies partially submerged in waters from the 1960s when it was dumped there by a paper mill company.
The waste pits are part of a federal EPA program known as Superfund to clean the site. Samples collected from sediment, water, fish and crab tissues both upstream and downstream from the site show elevated levels of dioxins above health-based benchmarks. Recent tests show a concentration of 360,000 parts per trillion (ppt). Anything over 1,000 ppt is considered an area of concern, Leos said.
The ingestion of dioxin is known to cause cancer, skin conditions, delay physical and neurological development and is known to have long-terms effects on the immune and reproductive systems.
The Harris County Attorneys office had reached an agreement with International Paper and McGinnes Industrial Maintenance Corporation that will result in those companies designing and building a containment structure to stop the release of dioxin from a long-closed paper mill waste site.
An agreement, signed on April 30th, requires the short-term containment work to be overseen by the Environmental Protection Agency to be completed within a year.