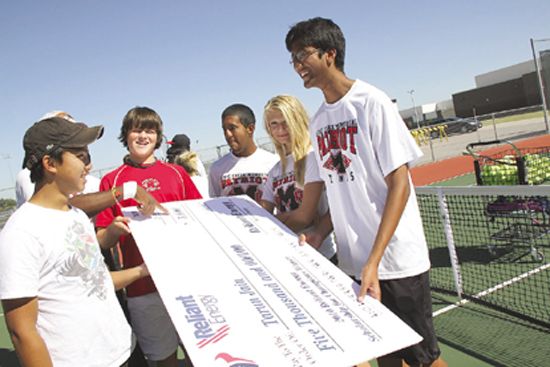 BAYTOWN Tarun Jain, a senior tennis player at Goose Creek Memorial High School, was chosen as the recipient of a $5,000 scholarship from Reliant Energy and the Houston Texans, through their Scholarship for Champions  Powering Strong Minds and Bodies Scholarship Program.
Coaches, principals, and administrators in school districts from the greater Houston area are given an opportunity to nominate student athletes for consideration, based on their athletic involvement and passion for their sport, as well as their ability to demonstrate ethics and leadership skills through their involvement in school activities and in their community.
Tennis Coach, Ismael Dutchover, nominated Tarun for the scholarship because he is a hard working kid and dedicated to everything he does.
He excels both academically and athletically, and in my opinion was a perfect candidate for the scholarship, said Dutchover. He has been a varsity player here at GCM since its inception and has always been one to strive for perfection. These are the types of kids you like to build your program around.

When asked about earning the scholarship, Tarun turned to his teammates and said he was proud to be a member of the Patriot team, and were going to win district.
Reliant Energy and the Texans Foundation chose eight recipients from more than 100 applications. All eight recipients have been invited to a pre-game on-field presentation at the Houston Texans game on Nov. 28, when the Texans host the Tennessee Titans.
Tarun has participated in tennis and was selected as the Team MVP for the 2008 fall season and Doubles Player of the Year for the spring 2009 season. He and his partner were undefeated throughout the 2008-09 season in mixed doubles, and as a junior, he was the top player on the Patriot tennis team.
In the classroom, Tarun is ranked No. 2, and has served as the treasurer and president of the Kiwanis (Key) Club, and treasurer of the Goose Creek Memorial National Honor Society.
For the last few years, Tarun has participated in many community events such as the American Cancer Societys Relay For Life, and the Feed The Vets program, the Wreaths Across America Foundation, and the annual City of Baytown Trash-off in which residents of Baytown help clean up the city.
Taruns $5,000 scholarship from Reliant Energy is the second one in two years for Goose Creek Memorial High School. Last year, senior tennis player Amy Brewer earned the schools first $5,000 scholarship from Reliant.